A step towards implantable fuel cells to operate medical devices from within the human body, using the body’s energy

Enzyme-based biofuel cells have been plugged into lobsters and they generated enough power to run a digital watch. In a separate experiment, the same US scientists placed the biofuel cells in a fluidic system that mimicked human blood circulation and used them to power a heart pacemaker.1 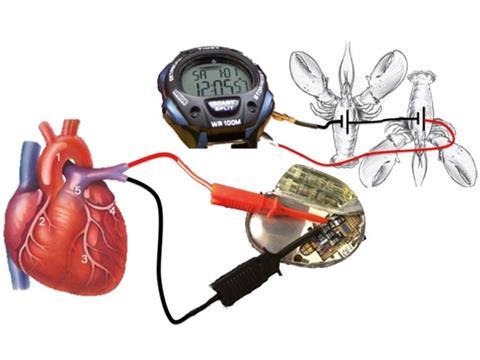 Biofuel cells coupled with enzymes can harvest electrical energy from biological fuels like glucose. This has led researchers to hope that they could one day power medical devices in people by burning fuel derived from the patient's diet. Implanting these cells inside living organisms is still a challenge; however, researchers have managed to implant them in rats, rabbits, insects, snails and clams. Despite this work, no attempts have been made to use these enzymatic fuel cells to power real electronic devices as the voltages reached were not high enough (below 0.5V).

Now, Evgeny Katz at Clarkson University, Potsdam, and colleagues, who did the work on the snails and clams, have implanted biofuel cells – connected in series – in two live lobsters. The enzyme-modified electrodes in the cells catalysed glucose oxidation and oxygen reduction in the fluid inside the lobster’s body, generating a current. The team found that the system could generate enough power to operate a watch (1.2V).

In a second test, the researchers linked up five biofuel cells in series and placed them in a flowing human serum solution. To replicate real-world conditions, they spiked the human serum solution with various concentrations of glucose corresponding to a hungry healthy person, a normal healthy person and a person with diabetes. They also applied different flow rates of the serum solution to represent whether a person is resting or active. These five linked cells were able to produce enough power to run a pacemaker (3V), which might mean that one day pacemakers could do away with battery packs.

The lobsters could actually have uses in military, homeland security and environmental monitoring applications. Sensing and wireless transmitting devices could also be carried and powered by small animals. The biofuel cells that can function in circulating blood could be suitable for biomedical applications, such as deep brain neurostimulators, cochlear implants and insulin pumps. They could extract energy directly from the human body, resulting in bionic human hybrids, say the researchers.

‘Although lobsters are crustaceans, which are arthropods and are therefore distant from mammals, the work represents a breakthrough in the field of biofuel cells by demonstrating that, with an implanted biofuel cell, you can get enough power from the compounds present in physiological fluids to power a pacemaker,’ says Serge Cosnier, research director at the National Centre for Scientific Research, France, who is an expert in biosensors and biofuel cells. ‘As the authors point out, the biofuel cell voltage is limited [Cosnier and coworkers recently reported an open circuit voltage of 0.95V2] but its combination with microelectronic circuits can lead to devices that can deliver a voltage of several volts.’ He adds that one challenge facing researchers is the problem of long-term stability of the proteins involved.

Before we see these devices being implanted in the human body, two problems need to be resolved, says Katz. The first is to increase the voltage output from the implanted biofuel cells to interface them with electronic devices, including pacemakers. The team is currently working on a charge pump to increase the voltage output. ‘The results will be formulated in our next paper, which we expect will be done in one to two months,’ says Katz. The other problem is stabilising biocatalytic electrodes for long-term operation. ‘This is a big challenge and may take a few years to solve,’ says Katz.