Since its discovery in 2004, the carbon-based material known as graphene has revealed a stream of attractive properties. Now, researchers in the US have shown that a two-layer version can deliver yet another: a wide, tunable bandgap. The discovery paves the way for new electronic devices, from lasers that change colour to electronic circuits that rearrange themselves.

Graphene is a sheet of carbon just one atom thick, with a structure that resembles chicken wire. Single sheets of the material have proved to have record-breaking strength, high conductivity and high transparency. But recently some scientists have come to suspect that the most interesting properties might arise in two parallel sheets, or so-called bilayer graphene.

Feng Wang and others at the University of California at Berkeley and Lawrence Berkeley National Laboratory have investigated the properties of bilayer graphene when it is performing within a field-effect transistor. Such transistors work using an electric field to control a semiconductor’s conductivity, which in turn controls charge flow. In Wang and colleagues’ device, however, there is a segment of bilayer graphene sandwiched between the transistor’s ’source’ and ’drain’ electrodes, and the electric field serves to pull apart the graphene’s highest valence band and the lowest conduction band.

To witness this effect, the researchers used infrared microscopy and monitored the absorption spectrum. Peaks in the spectrum revealed the crucial bandgap, which the electric field could tune from zero to over 250 meV. 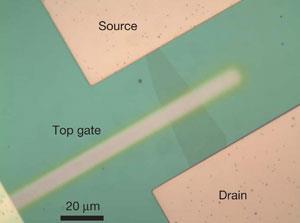 Optical microscopy image of the bilayer device (top view). The bilayer graphene is the dark patch between source and drain.

Wang told Chemistry World that the tunable bandgap, which generally determines a material’s transport and optical properties, will enable ’flexibility and optimisation’ of electronics and photonics. He says it could be used to control the colour emitted from lasers and other light sources. Moreover, because it can make insulators turn into semiconductors, and vice versa, he believes it might lead to electronic circuits that can be programmed in the field.

Yu-Ming Lin, a graphene scientist at IBM’s T. J. Watson Research Center in New York, said the wide bandgap in bilayer graphene will allow the creation of high-speed digital switches. ’I think this paper is very interesting and the results are definitely important to the field,’ he added.

However, Antonio Castro-Neto, a researcher at Boston University who has also studied tunable bandgaps in bilayer graphene, thinks there is still much more to be learned. He notes that bilayer graphene’s density of states -- that is, the number of energy states available for occupation -- is finite, which indicates there should be complex, many-body effects. ’These systems may be able to show magnetic or superconducting properties that have not been explored yet,’ he said.