Scientists get to the root of explosives decontamination

Scientists from Puerto Rico have discovered plants that are not only resistant to high levels of TNT but can remove it completely from aqueous media in under 48 hours.

The explosive trinitrotoluene (TNT) is a persistent contaminant that is toxic and mutagenic, and thanks to its use in over 80 per cent of the landmines worldwide, it can be found throughout the globe at military sites and war zones alike. 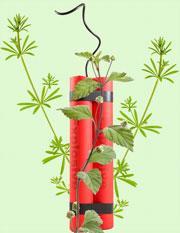 Samuel Hern?ndez-Rivera and co-workers at the University of Puerto Rico-Mayag?ez investigated the ability of three Caribbean plants - Rubia tinctorum, Lippia dulcis and Spermacoce remota  - to remove TNT. Plantlets of each were added to flasks containing solutions of TNT and samples were taken at timed intervals for high performance liquid chromatography analysis, with a flask containing just the TNT solution used for comparison.

R. tinctorum and L. dulcis removed nearly 100 per cent of the TNT from the liquid medium, showing a roughly 10-fold increase in the rate of TNT removal compared to loss by evaporation in the control flask. What is even more significant is that S. remota, under identical conditions, can completely remove TNT from the media in under 48 hours.

Hern?ndez-Rivera and his colleague Fernando Souto-Bachiller say that the main mechanism for TNT removal from the media is via adsorption through the roots, but once adsorbed, S. remota seems to have a different mechanism of action. They say that this result was initially attributed to either ’a possible enzyme exudate, which would then be responsible for TNT degradation, or a symbiotic relationship between the plant roots and a persistent microorganism, fungus or bacteria.’ Future work within the group will involve isotopically labelling TNT to investigate the enhanced behaviour of S. remota.

Tom?s E. Macek from the Institute of Organic Chemistry and Biochemistry, Czech Academy of Sciences, Czech Republic, says that the work deals with an ’important topic and that detoxification of contaminated sites is a global problem’, but ’there is much to be done to allow effective exploitation in the field’.

Hern?ndez-Rivera says that ongoing experiments are focused on using the plants in TNT contaminated soil, and although ’physical and biochemical processes in soils are much more complicated’, initial results look promising.