Boosting the flow in pharma's pipelines

Flow chemistry is poised to become an important tool for new drug development, according to pharmaceutical industry chemists testing the technology.

Scientists from US drug firms Pfizer and Merck, speaking at the Advances in Synthetic Chemistry Conferencein Frankfurt, Germany, on 9 April, said that flow devices are on the verge of being rolled out to solve real problems in medicinal chemistry.

While traditional batch chemistry is carried out in a flask, computer-controlled flow devices run dissolved reactants through temperature-controlled tubes or channels, producing a constant stream of product. To make gram quantities of the product, the reaction is simply run for longer - unlike batch chemistry, which typically has to be re-optimised when carried out at a larger scale.

’We’re very excited by it,’ says Pfizer lead scientist Chris Selway, based at Sandwich, UK. ’In terms of preparative flow chemistry, we’re starting to apply it to real problems.’

’Flow chemistry at Merck is still evolving, both within the process and medicinal chemistry groups,’ adds Merck chemist Paul Tempest, from the company’s research laboratories in Boston, US. ’But I anticipate interest will grow commensurate with the ability of flow chemistry to solve problems.’

Both scientists highlight two reaction types where flow technology is showing most promise - those involving hazardous compounds, and those which benefit from superheating their reaction solvents. 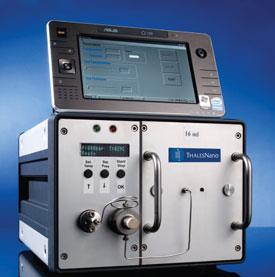 ’Flow is going to be useful for reactions with some type of safety issue that would prevent you from doing them on a large scale in batch,’ says Selway. ’If you’re doing it in flow, you can have only a small amount of material in process at any one time, but still make large quantities of material.’ One such example is the Curtius reaction, used to convert a carboxylic acid group into an amine, which proceeds via a potentially explosive azide intermediate.

Thanks to the high-pressure conditions that flow systems employ, reactions can also be heated above the normal boiling point of a solvent, which is sometimes enough to kick-start processes that won’t work in an unpressurised flask. Selway adds that the latest flow reactors can now reach temperatures and pressures that will make even very reluctant aromatic substitution reactions work. For example, Budapest, Hungary-based ThalesNano say their new X-Cube Flash can be run at 400?C and 200 bar, while rivals Uniqsis of Cambridge, UK, promise that their FlowSyn reactor can cope with 260?C and 70 bar.

However, flow reactors can also provide benefits at the other end of the temperature scale, says Tempest, since their high ratio of surface area to volume can quickly dissipate heat. Reactions that require very low temperatures in batch don’t have to be cooled so much in flow, while exothermic reactions are less likely to experience dangerous heat build-up.

Coupling software-controlled flow reactors with mass spectrometry (MS) is helping both firms to automate some of their reaction optimisation.

’The next evolution will be real-time reaction monitoring,’ says Tempest. Ultimately, such systems could analyse the products of a reaction, and then change the conditions accordingly until the best possible product yield is obtained.

Flow reactors do suffer from some disadvantages, however. The scientists note that reactors can become blocked if products precipitate out of solution, a problem that Selway estimates happens 10-20 per cent of the time. Tempest also reveals that Merck initially tried using flow reactors for multi-step iterative synthesis, but found that diffusion of the compound ’slug’ made this impractical.

’The longer the pathway for the reaction sequence being performed, the more space is required between ’slugs’ to avoid cross contamination from diffusion, and the more time is required to generate a library,’ says Tempest.

Despite these disadvantages, Pfizer is already beginning to provide flow devices to their medicinal chemists. ’Flow is a tool that every chemist should have access to,’ says Selway.

Go with the flow

Flow chemistry is set to have an impact far beyond the pharmaceutical industry, says Peter Seeberger of ETH Zurich, Switzerland. Along with MIT engineer Klavs Jensen, Seeberger has established a company, i2chem, to provide flow-based solutions to industry’s chemical synthesis problems. 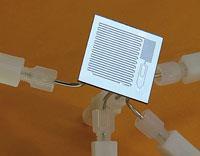 The company’s key selling point is that their microreactor uses silicon, rather than glass, for the reactor chip. Silicon chips can be made more cheaply and easily than glass, and can be readily etched into a wide variety of reactor designs, Seeberger told the RSC’s High Through put Medicinal Chemistry  meeting at Pfizer’s UK site in Sandwich on 6 May.

Coating the chip’s surface means the chips can also be used with corrosive reagents, including fluorinating agents. The chips are held in place by a quick-release clam shell-like casing, so that when blockages occur the chip can be rapidly replaced.

The team have also enclosed sensitive catalysts within their chips, which can be sent to a customer and plugged into a reactor device without the catalyst ever being exposed to the atmosphere.

Seeberger’s own research group at ETH uses flow chemistry extensively, ’in about 10 per cent of the reactions we do in my lab right now,’ he says. ’These microflow systems just allow us to do things we would not have been able to otherwise, and enabled my people to go about research totally differently - that’s why I’m so convinced about this technology.’