Hydrogen-rich ammonia borane could be a step closer to becoming a practical source of hydrogen for fuel cells following the development of a new ruthenium-based catalyst by chemists in the US. The catalyst can dehydrogenate ammonia borane at mild temperatures, producing the largest quantity of hydrogen by any dehydrogenating catalyst to date. The catalyst is stable in air and can be re-used for multiple cycles.

Ammonia borane (AB), H3NBH3, is a stable solid at room temperature and consists of almost 20 per cent by weight of hydrogen. Extracting the hydrogen for use in fuel cells is, however, difficult. Heating to above 100?C releases hydrogen, but is energetically inefficient. It can be hydrolysed by water, but this produces ammonia, which can poison fuel cells, and a residue with strong B-O bonds which is difficult to regenerate into AB. The dehydrogenation of AB using catalysts has been demonstrated, but these are unstable in air and are not reusable.

Now, Brian Conley, Denver Guess and Travis Williams of the University of Southern California have developed a stable and reusable ruthenium catalyst that can extract a record amount of hydrogen from AB but produces far fewer by-products poisonous to fuel cells. 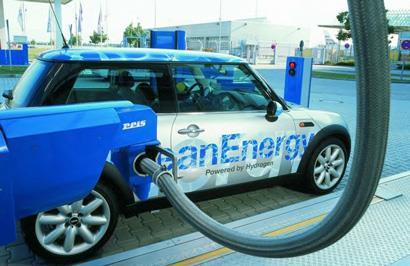 The new catalyst, in which a ruthenium centre is coupled to a boron, yields around 4.5 per cent by weight of hydrogen. While one of the products is the cyclic compound borazine - a fuel cell poison - this spontaneously polymerises to a gummy residue, polyborazylene, which not harmful to hydrogen fuel cells.

’We take a small amount of solvent and mix it with the catalyst and ammonia borane to something with the consistency of oatmeal,’ says Williams. ’When you heat it to 70?C hydrogen comes flying off, leaving a white residue that sticks to the side of the flask. You can then add more of the ammonia borane and repeat the reaction until the whole flask is full of the residue.’

Williams adds: ’To our knowledge this is the highest weight content dehydrogenation of AB and with a re-usable catalyst. These two things are important steps towards making the system commercially viable.’

Ian Manners, an authority on the chemistry of ammonia borane at the University of Bristol in the UK, says that understanding how small inorganic molecules such as amine-boranes and related species can be activated and manipulated within the coordination sphere of metal centres is of fundamental importance for their exploitation in hydrogen storage. ’The fact that the catalyst is well-defined and that the process appears to be homogeneous should help in this regard.’

Abhi Karkamkar who researches ammonia borane at the Pacific Northwest National Laboratory, US, says: ’The robustness of the catalyst in air and water will open up several commercial opportunities. The ability to work in highly concentrated slurries of AB is extremely appealing from a commercial standpoint.’