An international team of researchers has discovered a way of firmly ’welding’ carbon nanotubes to metal particles that could lead to new nano-scale electronic contacts.

The team, led by Florian Banhart of the Institute for Physics and Chemistry of Materials (IPCMS) in Strasbourg, France, stumbled upon their discovery when trying to get a closer look at some multi-walled carbon nanotubes (MWNTs) inside which they had deposited small particles of metal. They found that when they focused the beam of their electron microscope on the nanotubes, some of the carbon atoms were blasted away and the tube ended up bonded to the metal particle. 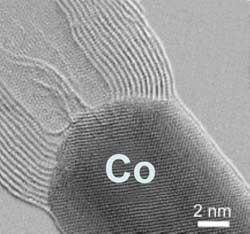 The nanotube layers bend to covalently bond the cobalt particles

’I think this is the first time it has been shown that carbon nanotubes can directly form covalent bonds with a metal surface,’ adds Barnhart. ’This is a really robust junction, with all layers of the tube connected to the metal crystal. [Our co-workers in Japan] performed electrical measurements on the structures, which showed that it is a genuine metallic contact, and density functional theory calculations done by our colleagues in Oak Ridge, US have also shown that electrons are delocalised over the junctions. This proves that they are covalently bonded and explains the high stability of the structures and their electronic properties.’

The second advantage of these welded joints is their strength - exploiting the incredible tensile properties of nanotubes relies on being able to make sturdy joints to other surfaces. The covalent bonding between the nanotube layers and the metal particles means that these welds are significantly stronger than previous attempts, where contact was limited to the outer nanotube layer or used a carbon-based ’solder’ to form a non-covalent joint. The metal particles also remain solid throughout the transformation, rather than melting as in some other welding techniques. ’We are now trying to break the junctions with an atomic force microscope [AFM] to measure exactly how strong they are,’ says Banhart. 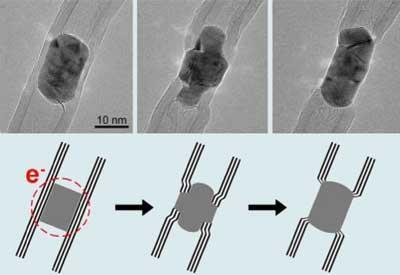 Irradiating nanoparticles trapped within the tube forms the covalent junction

The group has also discovered that the metal particles do not have to be inside the nanotubes for the welding process to be successful, it works just as well with the particles positioned on top of the tubes and then irradiated with the electron beam. This means the process has more potential applications, since it is much easier to control deposition of particles on the outside of the tubes than inside them. ’We can use the electron beam to cut or shape the metal contact,’ says Banhart, ’and what we want to do now is to make multiple junctions between nanotubes of different sizes, particularly single walled nanotubes [SWNTs], as they could have some very interesting electronic properties.’

Iris Nandhakumar, an expert in nanoscale materials and scanning probe microscopy from the University of Southampton, described the work as a good piece of primary research but warned there is still further work to be done. ’To be useful in applications, it needs to be scaled up into a method that could be applied to an array of nanotubes, rather than making isolated junctions,’ she said, ’but from a fundamental perspective it might offer some insight into how metal catalysts assist the growth of nanotubes, and how they are attached to the tubes as they grow.’