Carbon dioxide clusters have been spectroscopically identified for the first time

Canadian scientists have, for the first time, been able to identify spectroscopically carbon dioxide clusters that could provide valuable information on intermolecular interactions.

Despite the significance of carbon dioxide in atmospheric chemistry and use of supercritical carbon dioxide as an industrial solvent, the spectroscopic identification and study of carbon dioxide clusters have so far been limited to the dimer and trimer, as larger clusters can break up when being analysed.

Now, Robert McKellar and his team at the University of Calgary and the Steacie Institute for Molecular Sciences, Ontario, have identified (CO2)6 to (CO2)13 clusters using high resolution infrared (IR) spectroscopy.

The group was able to simulate IR spectra using previously published theoretically predicted structures and the PGOPHER software program, developed by Colin Western at Bristol University, UK. They then used these simulated spectra together with obtained rotational constants to help assign bands in their experimental spectra.

The results will contribute to the fundamental understanding of the transition between gas phase and condensed phase carbon dioxide, says McKellar. 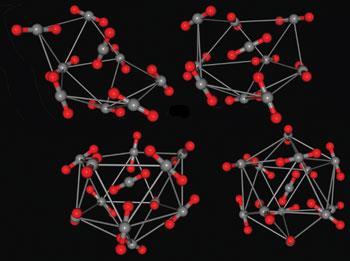 In addition, being able to measure carbon dioxide cluster spectra will aid other research areas, for instance, where supercritical carbon dioxide is used to dissolve molecules and bring them into the gas phase in order to perform spectroscopy on them.

’In order to get a clear spectrum of your molecule, you would need to know the spectrum of your cluster so that you could subtract cluster effects from your molecule’s spectrum,’ explains Hendrik Nahler, an expert in clusters at the University of Durham, UK. McKellar’s technique could enable this.

McKellar now plans to try observing even larger clusters to learn more about the intermolecular attractions.