Environmental concerns centred on limiting carbon emissions have led regulators to push consumers towards low-power CFLs (compact fluorescent light bulbs) and LEDs (light emitting diodes), rather than incandescent bulbs that are little changed since their invention more than 100 years ago. However, new research suggests that the environmental legacy of the toxic metals in CFLs and LEDs, including copper, lead, mercury and zinc, needs to be given greater consideration by policymakers formulating strategies to cut energy use. 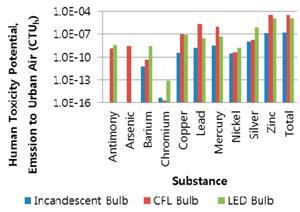 Researchers at the University of California, Davis and Irvine, and colleagues at Kangwon National University in South Korea, have used ‘a life cycle impact-based method’ to compare the potential environmental impact of CFLs, LEDs and incandescent bulbs, taking into account the metals present and expected lifetimes. The team says that both CFL and LED bulbs ought to be categorised as hazardous devices because they contain high levels of lead, which can be leached at 132 and 44mg/l, respectively. The regulatory limit is set at just 5mg/l. The researchers also point out that both have a high copper content at 111,000 and 31,600mg/kg, while the safety threshold for devices is 2500mg/kg. CFLs and LEDs also use aluminium, gold, silver and zinc. By contrast, incandescent light bulbs contain very little of these toxic metals.

CFLs and LEDs have two redeeming features: lower wattage and much longer lifetimes. Nevertheless, when the team took into account the longer usage of those devices, CFLs have three to 26 and and LEDs two to three times higher potential harmful effects on the environment than incandescent light bulbs because of the heavy metal toxicity issues. As such, the team suggests that research efforts and technology drivers must now focus not only on enhancing energy efficiency but also on reducing the use of hazardous and rare metals.

‘Although metals are used extensively in all electronic products, most design engineers do not realise they are environmentally problematic,’ says team leader Julie Schoenung. ‘Additional approaches to mitigating these concerns might include further scientific research to further improve bulb efficiencies, as well as the development and implementation of environmentally responsible end-of-life management,’ she adds.

Eric Masanet, associate professor of engineering at Northwestern University, US, believes this is an important study. ‘It suggests that our much-needed transition to more energy-efficient lighting may come with unexpected environmental costs,’ he says. ‘In particular, the study provides credible new data that can help us quantify the severity of the resource and toxicity impacts we may face as deployment of CFLs and LEDs continues.’