An ’organic’ aqua regia which can selectively dissolve noble metals in solution has been discovered by researchers in the US. The finding could lead to new approaches to recycle noble metals such as gold and platinum from industrial processes and aid the manufacture of nanomaterials, says the team.

Traditional aqua regia is a mixture of concentrated nitric and hydrochloric acids in a ratio of 1:3 that can dissolve noble metals such as gold, platinum and palladium, even though the metals are not soluble in either acid alone. However, such inorganic acid compounds cannot be tuned to dissolve one noble metal and not another, making recycling noble metals with inorganic acids a challenge.

Now, Wei Lin and colleagues at the Georgia Institute of Technology in Atlanta, US, have demonstrated for the first time an organic solvent which achieves high dissolution rates of noble metals under mild conditions, with the added benefit of being tunable to a specific metal. 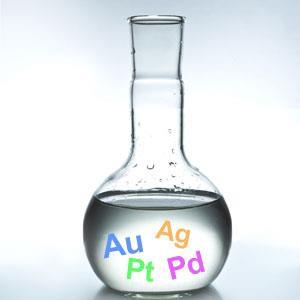 The team serendipitously discovered that gold dissolves when it is left in a mixture of thionyl chloride (SOCl2) and the organic solvent pyridine. Further experiments on the system revealed that other organic solvents and reagents - such as N,N-dimethylformamide (DMF), imidazole, and pyrazine - could achieve similar effects when mixed with thionyl chloride, with the gold recoverable by subsequent calcination.

’Varying the recipe and reaction conditions even allows the selective dissolution of noble metals,’ says Lin. For instance, a SOCl2/DMF mixture dissolves gold but not palladium or platinum. ’The selectivity may be beneficial in improving the purity of the recycled noble metals from catalysis and the electronics industry,’ Lin suggests.

’The spectacular dissolution selectivity relies on the intrinsic versatility of organic chemistry so that soon selective organic aqua regia mixtures will be used to dissolve the noble metal of interest,’ says Mario Pagliaro a chemist at Italy’s National Research Council (CNR). ’One immediate application will be full recovery of platinum from exhaust catalytic converters today, and from fuel cells tomorrow,’ he suggests.

However, in terms of efficiency and cost, Lin concedes that his organic aqua regia is currently unable to compete with traditional aqua regia. But it does offer a safer alternative and it could have uses beyond recycling, such as synthesis of noble metal nanostuctures and selective removal of nanocoatings. ’It is still far from practical applications yet,’ he admits.

The team is now working to further understand the chemistry of the dissolution process. ’There are a lot more interesting phenomena that we haven’t published yet about organic aqua regia,’ Lin adds.