How do you distinguish ’organic’ tomatoes from those grown with the help of synthetic fertilisers? By testing their nitrogen isotope ratios, suggest UK researchers. 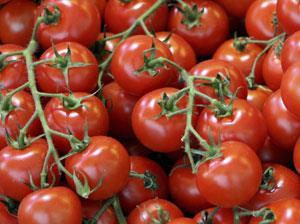 Crops grown organically - without artificial pesticides or synthetic fertilisers and with strict protocols on farming methods - command a premium price. So there is a risk of fraud: conventionally grown products can be passed off as organic and priced accordingly. Organic food products are currently authenticated by strict enforcement of production standards through certification and inspection. While certification can be checked easily for UK-grown produce, for imported produce the documentation is trickier to police.

Food standards authorities are therefore interested in new ’authenticity’ methods. Now, scientists at the Institute of Food Research (IFR) and the University of East Anglia have demonstrated one possible approach.

The biggest differences were found in tomatoes, with less marked differences for carrots and lettuces. ’There is overlap between different populations of crop because organic methods are not exclusive to organic farming, and conventional farmers can use manure, for example,’ Kelly said. ’At the moment for tomatoes, for example, our method appears to be reliable enough to distinguish about 60 per cent of organic samples from conventional ones, but results for the remaining 40 per cent are equivocal. The figures are lower for carrot and lettuce, so the potential usefulness of the test is very much dependent on the crop.’

For these reasons the test is unlikely to be a single reliable indicator of a crop’s provenance, but could be used to provide corroborating evidence where mislabelling might be suspected. Kelly also pointed out that fertilisers were only one small aspect of organic farming and so tests such as the one his team has been working on could not unequivocally rule on ’organic’ or ’non-organic’. He also stressed that it was not the intention to use such tests to police legitimate organic producers.

The researchers would now like to examine other isotope ratios, such as 18O versus 16O derived from nitrates present in organic and conventional crops, and to see whether specific trace metal concentrations could be used as reliable markers of differing agricultural regimes.

Gundula Azeeze, policy manager at the Soil Association, the UK body that supports and certifies organic producers, told Chemistry World, ’For organic produce generally there is a very rigorous certification system, and for produce grown in the UK it is very easy to check if there has been mislabelling. We have been sceptical about this kind of analytical test in the past.’ Azeeze conceded, however, that for imported produce the paper trail might be less reliable and that ’if such tests can be made sufficiently reliable they could possibly have a role in providing supporting evidence.’