Chemicals on rotation in a stellar nursery 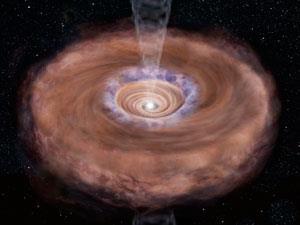 Protostars have been shown to act as nurseries for some interesting chemistry, as well as stars

The chemistry of protostars is not as simple as astronomers first thought. Observations of a protostar 456 light years from Earth reveals unusual compounds forming as gas and dust fall towards the forming star, hitting a boundary where temperatures and pressures rise drastically.

The Taurus molecular cloud observed by the research team is a hotbed of star-forming activity. The rotating envelope of gas and dust around the protostar IRAS 04368+2557 contains vast quantities of hydrogen gas, organic and inorganic molecules, which fall into the protostar’s disk. Understanding the chemistry of this disk could offer new insights into fledgling star systems.

Nami Sakai of the University of Tokyo, Japan, and colleagues, explain that the diameter of the disk of protostar IRAS 04368+2557 is 1000 times the distance from the Earth to the Sun – 1000 astronomical units (au). Within that vast envelope is a denser region just 90au across where astronomers anticipate planets would form. ‘For many years, we studied this protostar in detail with various telescopes because it harbours carbon-chain molecules and related species,’ Sakai tells Chemistry World. ‘We were interested in the origin and the fate of those molecules.’

The team has now carried out high spatial resolution observations of the millimetre and sub-millimetre wave lines of the protostar to reveal details of the chemical infilling. They discovered that as hydrogen collapses into the disk, its density rises threefold and its temperature goes from 10 degrees above absolute zero to 100K. Astronomers also found the cyclic unsaturated hydrocarbon C3H2 in the in-falling rotating envelope, whereas sulfur monoxide (SO) seems to sit just outside the inner circle at 100au. At this distance, the researchers explain that the gas's kinetic energy is converted to rotational energy. This represents what they refer to as a centrifugal barrier, a theoretical feature of protostar formation for which the chemical changes within had not been predicted.

‘Our finding is directly related to planetary system formation and associated chemical evolution,’ Sakai adds. ‘The chemical change is caused at the centrifugal barrier, which is determined by fundamental physics. This is a very important implication in studying chemical evolution from interstellar matter to solar system matter, and also in tracing the pre-solar materials founds in meteorites back to interstellar matter.’

‘These beautiful data demonstrate that ALMA [observatory] continues to present surprises to astrochemists that were not predicted and that there are additional processes that may change the chemistry from its pristine pre-stellar stage as material enters the disk,’ says Ewine van Dishoeck of Leiden University, the Netherlands. ‘Observations of other systems are needed to determine whether this conclusion holds more generally.’