Venkatraman Ramakrishnan, Thomas Steitz and Ada Yonath win Nobel prize for chemistry for studies of the structure and function of the ribosome

This year’s chemistry Nobel prize has been awarded to scientists working on the chemistry of life - the translation of DNA information into proteins by the ribosome.

The winners - Venkatraman Ramakrishnan of the MRC Laboratory of Molecular Biology (LMB) in Cambridge, UK, Thomas Steitz of Yale University, US, and Ada Yonath from the Weizmann Institute of Science in Israel - used x-ray crystallography to determine the structure of the ribosome.

The ribosome is the machinery that turns the information encoded in DNA into a protein. DNA’s genetic information is copied into messenger RNA, which is then used by the ribosome as a ’recipe book’ for making proteins. Ribosomes are extremely complicated complexes of protein and RNA and have two parts: the small subunit, containing a large RNA molecule and about 32 proteins, and the large subunit, which has three RNAs and about 46 proteins. The whole complex contains hundreds of thousands of atoms, so structure determination was a massive task. 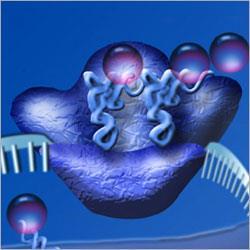 Ramakrishnan, Steitz and Yonath won the Nobel prize for Chemistry for their studies of the ribosome

However, the sheer size made the task a huge crystallographic challenge. One problem was how to determine the phase angle when there are so many atoms in the molecule. Normally, this is done by soaking the crystal in heavy atoms such as mercury, but with so many attached to the ribosome more information was needed.

Steitz found it was possible to use electron microscopic images of the ribosome to determine how the ribosomes were arranged in the crystal, and this plus the heavy atom data enabled the phase angle to be determined. His first crystal structure of the large subunit was published in 1998, albeit at low resolution.

Meanwhile, Ramakrishnan’s work on the small subunit showed that the ribosome has a ’molecular ruler’ which double checks that the RNA has been decoded correctly. All three published structures in 2000 that finally contained enough detail to map the locations of all the ribosome’s atoms - Steitz the large subunit from the microorganism Haloarcula marismortui and the other two laureates the small subunits from Thermus thermophilus.

All three have also produced 3D structures that show how antibiotics bind to the ribosome. Many commonly used antibiotics attack the bacterial ribosome while leaving the human ribosome untouched, and these structures are being used to develop new antibiotics.

’I am deeply indebted to all of the brilliant associates, students and postdocs who worked in my lab as science is a highly collaborative enterprise,’ says Ramakrishnan. ’The idea of supporting long term basic research like that at LMB does lead to breakthroughs, the ribosome is already starting to show its medical importance.’

’Determining the structure of the ribosome was a huge feat of structural biology and crystallography, and it is the largest single protein complex that has been solved so far,’ says Tony Wood, head of worldwide medicinal chemistry at Pfizer. ’It gives a fundamental insight into the processes that are important in protein synthesis in living organisms, and their Nobel prize is very well deserved.’