One of the biggest cases of scientific fraud in chemistry is continuing to send shockwaves across India, as concerns are raised over the senior academics who co-authored a plethora of discredited academic papers with researcher Pattium Chiranjeevi.

An enquiry committee last year found Chiranjeevi, a professor of chemistry at Sri Venkateswara University (SVU), Tirupati, guilty of plagiarising or falsifying results in over 70 journal articles published between 2003 and 2007. The case, widely reported in February, saw the researcher stripped of all responsibilities except teaching - though he continues to protest his innocence and is preparing to take legal action.

But attention has now turned to the researchers that put their names to nearly 45 of the suspect papers, who include the heads of the university’s physics, mathematics, geology and environmental sciences departments. Renowned Indian chemist Goverdhan Mehta says that the level of collaboration alone should have flagged up the ’colossal’ fraud earlier. ’In my entire career as a chemist I must have had a handful of papers with mathematicians but 30 is something incredible,’ says Mehta, who is currently heading a government committee that assesses and accredits Indian universities.

’The involvement of professors from other faculties raises more ethical issues,’ he adds. ’They should have vetted the data before putting their names [to the paper].’

Choppala Rathnam, SVU’s vice chancellor, says the university plans to investigate further. ’We do not know who are all the faculty members involved,’ he told Chemistry World. ’We will definitely look into that.’

Rathnam, who took charge two months ago, says he will next send all the enquiry committee’s reports to the executive council - the university’s top decision making body - for review. ’I cannot take action on my own,’ he says.

University sources allege that Chiranjeevi and his students combed old and obscure journals on the internet for papers to plagiarise. According to one, Chiranjeevi used to start his day by asking his students, ’Well, what have you downloaded today?’ 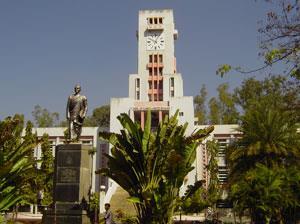 He was also supplied with ’source’ papers by former student Kailasa Suresh Kumar, then a post-doc at Chonbuk National University, in Seoul, Korea, and Kanji Suvardhan, who had obtained a fellowship to study at the National University of Singapore (NUS) on the strength of around 50 papers he had coauthored with Chiranjeevi.

Kumar’s contract has not been renewed and Suvardhan was expelled by NUS - though he is now working on a PhD at SVU under a different supervisor.

’The fraud remained undetected for so long because the papers were dealing with mundane chemistry and not any hot area of research,’ says Sundarababu Bhaskaran, chemistry professor at the Indian Institute of Technology (IIT), Madras. Chiranjeevi never received funding from government agencies and so was not obliged to submit his papers to sponsors, and he did not list all his publications in the university’s annual reports.

Hosakere D Revanasiddappa, a chemistry professor at Mysore University, suspects that some of his own papers, along with those of his colleague P Nagaraju, which Chiranjeevi collected during a visit to his lab in 2003, might have kick-started the operation. ’I was shocked that Chiranjeevi’s paper on selenium had large portions of text and tables copied from the paper he took from us,’ he told Chemistry World.

Revanasiddappa believes Chiranjeevi also plagiarised another three of his papers by changing the names of metals, reagents and test specimens. ’Chiranjeevi had reproduced our results as they were, whereas his results should have been more precise if he had really used the atomic absorption spectrometer that he claims to have used,’ Revanasiddappa said.

According to the enquiry committee, atomic emission and absorption spectrometers that Chiranjeevi claimed to have used do not exist at his university. It also found that certain reactions described in the papers ’were impossible’ and the valencies of stable carbon atoms were shown as three in one paper and five in another.

A paper on carbosulfan copied from another paper on bendiocarb ended up with the same figure - of bendiocarb - with no more than a different caption. Surprisingly both papers appeared barely a month apart in the same Springer journal - Environment Monitoring & Assessment- but were not spotted by peer reviewers. Over 20 were published in Elsevier journals including Talanta, Food Chemistryand Analytica Chimica Acta, of which 13 have already been retracted.

Eluvathingal Jemmis, chemistry professor at the Indian Institute of Science in Bangalore, says that with ever increasing numbers of journals, researchers are snowed under with papers to review. ’Everybody I know is getting more papers than they can review,’ says Jemmis. ’They are reluctant to say no because their own papers may be looking out for reviewers.’

Some fear that the Chiranjeevi affair could exacerbate the problem of declining student enrolment in university chemistry courses.

’We are worried about the fallout,’ admits IIT’s Bhaskaran. Professional bodies, such as the Indian Chemical Society, are ill-equipped to deal with cases like Chiranjeevi’s, he says: ’At best they can denounce the action and set guidelines, but not keep a watch.’

Rathnam hopes his university will not be judged by Chiranjeevi’s actions. ’We have a number of people here who do good work,’ he says. ’They should not be penalised. It is not fair.’

Meanwhile, Chiranjeevi says the case against him was fabricated and the enquiry committee one-sided. ’By April I will be ready to fight in the court,’ he told Chemistry World. ’There is nothing to worry about.’