US researchers have developed a sensitive and simple technique for identifying the dyes used to colour textile artefacts. Their approach will not only help understand the composition of heritage materials for conservation purposes but could offer new insights into the technological relationship ancient peoples had with their environment.

Cathy Selvius DeRoo of Detroit Institute of Arts and Ruth Ann Armitage of Eastern Michigan University have applied direct analysis in real time-time-of-flight mass spectrometry (DART-MS) to the four main natural fibres - cotton, wool, linen and silk.  Their aim was to develop a technique to identify the dyes found in historic textiles. However, pigments can have a strong tinting effect on textiles at microgram and even nanogram quantities and so represent a major analytical challenge, especially as often only a tiny fibre or fragment is available.

DART-MS is an ambient ionisation technique that has previously been used in forensic, food and pharmaceutical analysis. The team tested DART-MS on solutions of three common dyestuffs, quercetin, indigotin and alizarin, found in artefacts at the Detroit Institute of Arts, as well as simulated dyed fibres. Control experiments with dyes produced by the team from dry yellow onion skin or ground madder root, were used to validate the findings. 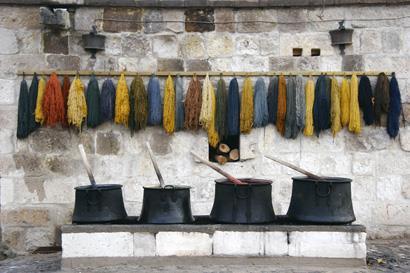 The approach allowed the team to quickly carry out precise mass determinations on small samples of dyed textiles. The ability to identify flavonoid, indigoid and anthraquinone classes of dyes means that this analytical approach holds promise as an important tool for the analysis of the organic dyes found in rare cultural heritage materials.

’We may be able to study historic clothing, furniture, carpets, puppets, paints, manuscripts with this technique,’ says Armitage. ’The applications are driven by the questions being asked, either from a conservation or archaeological standpoint.’

In some cases, understanding how dyes were used in a particular object can provide evidence of trade or verify the age of an artefact if, for example, they were only available after trade with the New World. Such understanding is helpful in conservation as it is necessary to first understand the materials to preserve them.

The team points out that their approach might have wider uses. ’Synthetic textiles should work as well, but we haven’t tried yet,’ Armitage tells Chemistry World. ’The organic colourants can be used in paints as well, so we are working to adapt our technique for identifying the dye compounds in other artworks, too.’ She adds that the approach might also be extended to ceramics. ’Right now, the limitation is having a sample that we can place into the DART gas stream,’ she concedes. ’That means physically removing a piece of an artefact/artwork. You have to have a good reason to sample these kinds of materials.’

Maciej Jarosz, chair of analytical chemistry at Warsaw University of Technology, Poland, suggests that the technique would be most useful for analysing small objects with simple matrices without separation. ’The idea is really valuable,’ he says. However, he points out that it could be very difficult to differentiate flavonoid glycosides, because of the instrumental limitations, mainly the dimensions of the ionisation space.