Researchers, including two high school students and a Nobel laureate, have created a sensitive, easy to use device to detect cocaine and other small molecules. 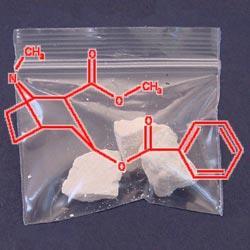 The team, led by Kevin Plaxco at the University of California at Santa Barbara, US, developed a small molecule sensor based on aptamer technology. Aptamers are DNA strands designed to recognise specific molecules. The technology was coupled with an electrochemical system that translated the molecular recognition event into an electrical signal.

The researchers combined a methylene blue redox tag with an aptamer sequence known to recognise cocaine molecules. When the DNA, immobilised on a gold surface, wraps around the cocaine molecule, it brings the blue tag into proximity with the surface to create a detectable electrochemical signal in seconds.

’Two high-school students who joined the lab last summer for work experience learned to build these devices within a week and recorded the dose-response curve shown in the paper. That’s how easy it is to make and use these sensors,’ Plaxco told Chemistry World. The test is 200 times more sensitive than the Scott test, which is commonly used by police and customs, say the researchers. And it is more difficult to mask by contaminants, they add.

The same technique can be applied to many molecules beyond cocaine, said Alan Heeger,   winner of the 2000 Nobel prize for chemistry, on whose work the technique is partly based. ’A whole class of biosensors can be based on this concept,’ said Heeger.

Ciara O’Sullivan from the Universitat Rovira iVirgili, Spain, is equally enthusiastic about the work. ’The true beauty of the approach is that the only end-user intervention required is to add sample and wait a couple of seconds for the response,’ O’Sullivan told Chemistry World. ’No washing, no mixing, no incubations - sublime simplicity!’