A test tube based system of chemicals that exhibit life-like qualities such as indefinite self-replication, mutation, and survival of the fittest, has been created by US scientists. The researchers say their perpetually replicating RNA enzymes take us a step closer to understanding the origins of life on Earth, as well as to how life may one day be synthesised in the lab.

The system, created by Gerald Joyce and Tracey Lincoln at the Scripps research institute in La Jolla, California, involves a cross-replicating pair of ribozymes (RNA enzymes), each about 70 nucleotides long, which catalyse each other’s synthesis.  So the ’left’ ribozyme templates the synthesis of the ’right’, which in turn templates the ’left’ and so on, building each other via Watson-Crick base pairing.

’This is the very end of the line, where chemistry starts turning into biology,’ says Joyce. ’It’s the first case, other than in biology, of molecular information having been immortalised.’ 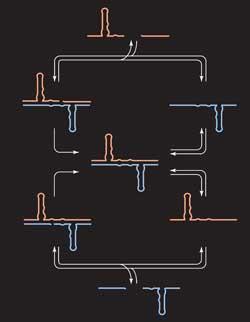 The RNA pair (one red, one blue) template each other’s synthesis

Joyce’s experiment was designed to test the ’RNA World’ theory, which proposes that DNA-based life evolved from a stage whereby RNA acted as both an information-storage molecule, like DNA, and as a catalyst, like enzymes, and was also capable of self-replication.

’This work is the biggest injection of support for the RNA world hypothesis in a long time,’ says Donna Blackmond, Chair in Catalysis at Imperial College London, UK. ’It’s a demonstration of principle that indefinite replication, coupled with selection via mutation, is quite plausible for RNA. The fact that it goes on indefinitely is a big thing for showing that this really could have been how life started,’ she adds.

Scientists have previously dabbled with similar synthetic replicatory systems, but these systems fell short of mimicking biological systems because they eventually stop replicating. This is because the bond between the catalyst and its product becomes too strong, making the system self-poisoning. By using cross-replication, Joyce and Lincoln seem to have overcome this problem and shown, for the first time in a purely synthetic chemical system, indefinite replication, so long as the team continue adding oligonucleotide building blocks.

Only the strongest will survive

The system also demonstrates natural selection. The team created twelve sets of cross-replicating enzymes (’left’ and ’right’ 1 to 12) and allowed them to compete for a common pool of oligonucleotide building blocks. Occasionally, a mutation would arise, so instead of making ’right 7’, ’left 7’ would instead combine oligonucleotides in a new way to make, for example, a ’right 7-left 12’ hybrid. Such recombinants arose and then grew over many, many rounds of replication to dominate the population.

’This parallels what happens in biological systems, like natural selection or survival of the fittest,’ says Joyce. ’It isn’t alive, however, because what it doesn’t have is the ability to invent novel functions out of whole cloth. If it could do that then most scientists would say that it crossed the line into life.’