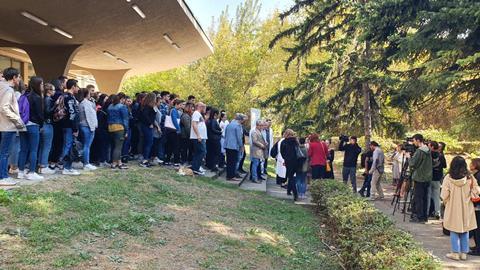 Source: Staff at the Institute of Chemistry

Chemists stage walk-out over lack of support in North Macedonia

Around 200 students and researchers staged a protest at the Institute of Chemistry at Ss Cyril and Methodius University of Skopje, North Macedonia at the end of October complaining of poorly equipped labs and a lack of funding.

‘We came out in front of the institute to express our dissatisfaction with the situation in which the most renowned research institution in Macedonia has found itself,’ Marina Stefova, head of the institute tells Chemistry World. She says the institute has not been allowed to employ new young researchers, which has created a staffing shortage, and there has been a lack of support for higher education and research in general for many years, especially over the last decade.

The institute has around 300 students, but staff numbers have fallen from around 60 at the turn of the century to only 24 today as a result of a hiring freeze. Its labs have also fallen into disrepair because of a lack of adequate funding from the government.

The protesters’ three key demands were the urgent recruitment of young researchers, funding to renovate and equip laboratories and the institute, and money for research projects that also provide support for young researchers, such as tuition and scholarship funds.

‘Many higher education and research institutions in the country agree with us and hope to get scholarships for young researchers – MSc and PhD students – to enable their stay at the universities in Macedonia, and prevent a massive brain drain,’ Stefova says.

She adds that they are still awaiting a decision from the ministries responsible for recruiting new staff. She has heard that the funds have been approved since the protests, and are now ‘in a final stage of approval at the Ministry of Finance’.

But there has been no official response from the government yet, and the science and education minister, Arber Ademi, did not respond to Chemistry World’s request for comment.

‘We are still waiting for the decision on the urgent request for positions for young assistants and hope to get it this or next week at the latest,’ Stefanova says. ‘We have also submitted requests for allocating funds in the next year for renovation and new equipment in the student labs and hope to get them.’

Stefova is hopeful that it will be possible to start creating positions for young teaching assistants in the coming weeks and that research at the institute will be able to get back to normal. She doesn’t exclude further walk-outs if their demands are not met and says ‘we will discuss it at the institute staff meeting and decide on further steps’.