Radioactive fallout from the Chernobyl disaster impaired the mental development of Swedish children that were still in the womb at the time of the incident. That’s the conclusion of a new study by US-based researchers, showing that affected children went on to perform poorly at school. The findings suggest that infants are endangered by radiation exposure at levels previously thought to be safe.

Economists Douglas Almond and Lena Edlund from Columbia University, New York, US, and their Stockholm University colleague M?rten Palme, carried out an analysis of the academic achievements of more than 560,000 Swedish children born between 1983 and 1988.

They found that academic performance was generally weaker in all children still in utero at the time of maternal exposure to Chernobyl fallout, and this effect was most pronounced for those foetuses at 8 to 25 weeks post conception. This is the peak period of brain development when cells may be particularly vulnerable to being killed by relatively low doses of radiation, Edlund said. 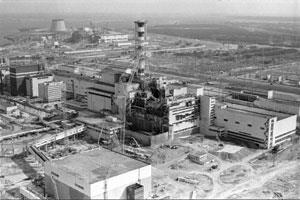 Moreover, children born in regions of Sweden that received most fallout seemed to fare worst - for the eight municipalities receiving the highest doses, children born between August and December 1986 were four per cent less likely to qualify for high school and had five per cent lower grades.

The authors expect their results, seen by Chemistry World, to be published later this month as a US National Bureau of Economic Research working paper.

Concerns about the effects of the explosion at the Chernobyl nuclear power plant on 26 April 1986 have mainly focused on the raised incidence of thyroid cancer and birth mutations in Ukraine and Belarus, close to the reactor. But according to the International Atomic Energy Agency, there has been no solid evidence of adverse inherited or reproductive effects which impact the overall health of children.

Brain damage was recorded in Japanese babies born after atomic bombs were detonated at Hiroshima and Nagasaki in 1945, but their mothers had received radiation doses much higher than those falling on Sweden in the weeks after Chernobyl. Indeed, the radiation exposure of Swedish mothers reached a maximum dose of about 4 milliSieverts, perhaps twice the normal background level and within the ’safe’ control range of the Japanese study, Edlund told Chemistry World. Despite this, the problems revealed in their study may be connected to the concentrated period of the extra dose. ’It’s the difference between drinking a litre of vodka in an hour or over several months,’ Edlund said.

Edlund accepts that their findings are likely to provoke controversy. As social scientists straying into an area of research dominated by biomedical and physical sciences researchers, their conclusions are sure to be scrutinised particularly closely. However, the method and conclusions appear to be ’sound’, said George Gettinby, a statistician at the University of Strathclyde, UK. But he warned against making premature assumptions about the data - ’their model does not prove cause and effect, only an association [between academic performance and radiation exposure],’ he said.

Tony Brooks, an environmental scientist at Washington State University, Richland, argues that the key period of vulnerability to radiation-induced mental impairment lies between 8 to 15 weeks after conception. He suggests that many of the children identified by the study as being affected by fallout would actually have passed through their risky developmental period before Chernobyl radiation actually reached Sweden.

"It’s the difference between drinking a litre of vodka in an hour or over several months" - Lena Edlund, Columbia University

David Brenner, professor of radiation oncology at Columbia University, also gave a guarded response. ’I don’t think this "proves" the link between low radiation doses and cognitive development, which is well established at higher radiation doses, but it is certainly suggestive. And there have been other, similarly motivated, studies which came out with a negative result.’ ’Studies of small, but potentially significant, health effects are inevitably at risk of being confounded by unknown factors,’ added Jim Smith, an environmental scientist at the University of Portsmouth, who researches the impact of the Chernobyl accident. ’But this study appears better than most at controlling for those factors.’ Smith suggests that further research involving children from adjacent countries would confirm or deny the claims.