Click chemistry allows researchers to snap together simple starting materials to form complex structures with relative ease. Now, researchers in the US have used this strategy to make three-dimensional hydrogels that are not only compatible with living cells but can be tuned to create specialist growing environments - culture niches - for studying cell function. The tuning of these models of the extracellular matrix can be carried out with light using photoconjugation and photocleavage reactions.

Cole DeForest and Kristi Anseth of the University of Colorado, Boulder, explain how growing cells in hydrogel matrix cultural niches can allow researchers to investigate how cells receive information from their surroundings. The hydrogel niches produce a well defined and cytocompatible microenvironment in which different stimuli can be introduced in isolation without interference from the myriad environmental cues of living tissue, for instance. Such three-dimensional systems are much more representative of the living environment in which cells find themselves than the conventional two-dimensional approach to studying cell processes.

The researchers point out that the orthogonality of click chemistry allows them to carry out photochemical reactions to physically change specific aspects of the microenvironment without disturbing the overall structure and without harming the live cells cultured in the hydrogel. 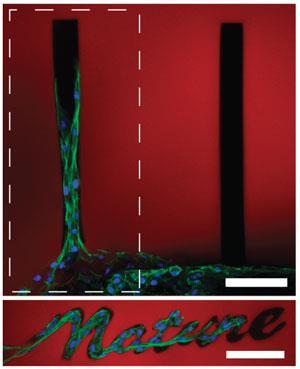 Critically, the reactions used to change the microenvironment need to be mild, aqueous and to proceed at 37?C, physiological pH and under atmospheric concentrations of oxygen. The researchers and others have demonstrated that such biocompatible photochemistry offers control in space and time of the hydrogel chemistry. They have also extended this approach to create synthetic cell culture systems by introducing chemical functionalities in pre-defined patterns so that they might also control cell spreading and migration in three dimensions.

Anseth and her team have now developed the concept still further so that different wavelengths of light can be used to add a fourth dimension of control over the microenvironment, giving them the opportunity to change the cultural niche over the course of an experiment too.

Ultimately, the approach will not only improve experiments into how cells handle information but could lead to more controlled approaches to growing stem cells, to biomaterial design, and even in tissue regeneration and engineering.

Ryan Wylie of the University of Toronto, Canada, works on controlling similar hydrogel scaffolds for modelling the extracellular matrix. ’Within cellular microenvironments, cells are surrounded by many complex signals that change over time,’ Wylie explains. ’These signals can be broken down into two major categories: chemical and physical. Deforest and Anseth have demonstrated for the first time the ability to three-dimensionally control both properties within the same synthetic matrix over time.’

Wylie adds that the new technology will undoubtedly lead to the design of matrices that mimic the native extracellular matrix and will help to better understand the interaction between cells and their microenvironments. ’The unprecedented control of this technology will one day lead to the design materials for the repair or replacement of tissues.’