Complex organic matter may have been found beyond the Solar System

Scientists in Hong Kong believe they have found traces of organic compounds deep in interstellar space that have similar structures to coal and oil. The findings - which are based on infrared spectroscopic data - suggest that these organic compounds exist throughout the universe, and may have seeded life on Earth.

For decades astronomers have been aware of a band of mid-infrared emissions coming from interstellar space, but haven’t been certain of its origin. Many believe the emissions arise from polycyclic aromatic hydrocarbons (PAH) that are excited by ultraviolet photons. Others claim that there are flaws with this hypothesis. These scientists argue that the infrared emissions exist even around cool stars where there is no stimulating ultraviolet radiation, and - perhaps more significantly - that in interstellar environments no individual PAHs have ever been identified.

Now, Sun Kwok and Yong Zhang of the University of Hong Kong have come up with a different answer to what these emissions mean. Taking data from the European Space Agency’s Infrared Space Observatory and Nasa’s Spitzer Space Telescope, Kwok and Zhang analysed the spectra of dust formed in exploding stars, known as novae. Rather than finding sharp, well-defined features that would be consistent with pure PAHs, the researchers discovered features hinting at non-aromatic, or aliphatic, compounds. Indeed, the researchers believe their data are most consistent with emissions from organic matter with a mixed aromatic-aliphatic structure, similar to coal and oil. 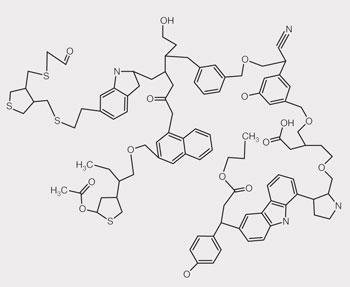 A proposed structure for the interstellar aromatic-aliphatic compound

If interstellar space does harbour such complex organic matter, it would be a significant discovery. Coal- and oil-like compounds have already been spotted on meteorites - the remnants of a distant past when Earth was bombarded by comets and asteroids. Linking such compounds to deep space suggests that Earth’s complex organic matter - and by extension life - might have been seeded from outside of the Solar System.

However, Aigen Li of the University of Missouri in Columbia, US, raises a concern on one aspect of Kwok and Zhang’s model - that the organic matter’s aromatic component causes a 3.3um infrared emission feature and its aliphatic component causes a weaker, 3.4um feature. If this were true, Li says, absorption spectra from particularly dusty regions of space should also have a strong 3.3um feature and a weak 3.4um feature - but past observations have actually shown these strengths to be reversed. ’Therefore, the [two features] are probably not from the same material,’ and PAHs are still a likely cause of the infrared emissions, he concludes.

Still, Kwok and Zhang are persevering. ’We hope to continue to pursue astronomical infrared spectroscopic observations to better identify the exact chemical composition of these compounds,’ says Kwok.