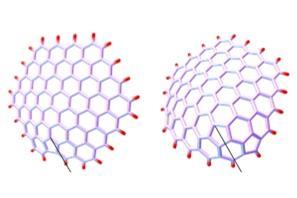 Unidentified cosmic infrared emissions may no longer be so mysterious. Scientists believe that they have now identified the origin of these enigmatic emissions – structurally defective polycyclic aromatic hydrocarbons (PAHs).1

Researchers have studied mysterious interstellar infrared (IR) emissions from planetary nebula for over 30 years, but have so far been unable to pinpoint their origin. PAHs, planar compounds consisting of fused aromatic rings, have long been suspected to be behind the signals.

But some signals didn’t seem to make sense: while some PAH vibrational modes match the emissions, scientists have been unable to account for others. These inconsistencies have led other researchers to propose the signals come from complex organic compounds.

By modelling PAHs’ electronic structures and IR signals, astrochemists have now discovered that out-of-plane bending and changes in aromaticity are responsible for the mysterious emissions. These structural defects occur as PAHs form or result from photochemical decomposition. The more bent the molecules are, the more irregular their IR emissions become.

PAHs are one of the most common forms of carbon in the universe, and may even have played a part in kick-starting life on Earth. Researchers have found that polyaromatics can transform into complex organic compounds under conditions found in cosmic ice grains.2 As interstellar ice is common in planet-forming regions, PAHs could have provided the building blocks for early amino acids and nucleotides. However, this PAH world hypothesis remains to be confirmed.