Chemists in the US have discovered a tungsten complex that can break a strong carbon-carbon bond in an aromatic ring. Coaxing such unreactive C-C bonds to participate in chemical reactions could open up whole new avenues of organometallic chemistry for synthesis and the petrochemical industry.

Ged Parkin and Aaron Sattler at Columbia University, New York, were originally searching for molybdenum complexes that could cleave the carbon-nitrogen bonds of heteroaromatic ring compounds. The idea was to improve hydrodenitrogenation - the process by which nitrogen is removed from fossil fuel mixtures. ’We’d had some success with molybdenum, but we’d never managed to cleave the C-N bond,’ says Parkin.

The team switched to tungsten complexes, which are generally more powerful in bond-cleaving reactions. When they added quinoxaline to their complex, rather than breaking the C-N bonds as they’d hoped for, they found that a C-C bond had been cleaved to form a chelating diisonitrile. ’So we did get a bond cleavage reaction,’ Parkin adds, ’not the one we were hoping for, but in retrospect it’s much more interesting.’ 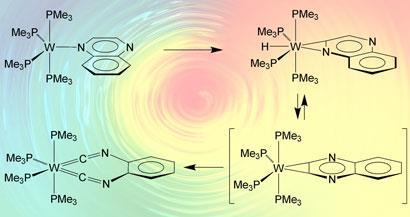 David Milstein, an expert in organometallic chemistry at the Weizmann Institute in Rehovot, Israel, thinks the work is quite remarkable: ’aromatic C-C bonds are very strong, and even with C-C single bonds this kind of reaction is very rare.’ He adds that most cases of C-C bond cleavage have been seen in strained molecules where cleaving the bond releases the strain.

However, Milstein points out that the reaction has only been shown to work for quinoxaline, and is a stoichiometric reaction - one molecule of the tungsten complex is needed for each quinoxaline - but there is potential to develop it. ’At the moment it’s mostly of fundamental interest,’ he says, ’but you could see the possibility of releasing the new [diisonitrile] ligand.’ He adds that making the process catalytic would depend on releasing the ligand without affecting the reactivity of the complex, which could be tricky.

Parkin is excited about developing the chemistry, but his first focus is to understand and control the mechanism. ’We’ve proposed a mechanism based on the fact that nitrogen heterocycles are known to coordinate through the nitrogen atom and then insert the metal into adjacent C-H bonds,’ says Parkin. He explains that if the tungsten did this twice, it could form an aryne-type tungsten dihydride complex with a strained three-membered ring formed from the C-C bond and the W centre. Releasing H2 and cleaving the C-C bond then gives the stable diisonitrile complex.

However, this is only one of several paths the reaction could take, so to clarify what’s happening Parkin is keen to investigate further. ’We want to look at other heterocycles, but we really need to look at it computationally to get more insight into the mechanism.’ He is also optimistic that the work will open doors for other similar reactions: ’it’s the kind of thing where once one person sees it, it starts cropping up everywhere.’