Delivering insulin in a skin cream 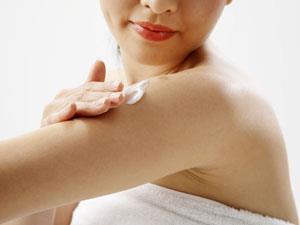 Scientists in Japan have developed a way to administer insulin to patients through the skin. Such a method avoids one of the problems associated with injections and oral administration in which a drug’s concentration is reduced as it passes through the digestive system. It would also be a more pleasant experience for patients.

Masahiro Goto from Kyushu University in Fukuoka and SO Pharmaceutical Corporation in Kobe, and colleagues, prepared a capsule loaded with insulin that is able to penetrate the skin with its cargo.

The team made their capsule by surrounding insulin molecules with proteins and coating the protein molecules with a hydrophobic surfactant to from protein–surfactant complexes. Then, they added oligo-arginine peptides as protein transduction domains and dispersed the complexes in oil – isopropyl myristate – which is known to have a permeation-enhancing effect. ‘The main function of this new system is to promote protein penetration through the hydrophobic stratum corneum [outermost layer of the skin],’ explains Goto.

The team tested their delivery vehicle on pig skin and found that the solid-in-oil dispersion delivered six times more insulin into the skin than an aqueous solution. The peptides further enhanced the concentration of insulin delivered through the skin.

‘Transcutaneous protein delivery is a difficult problem, the solution of which could enhance the quality of life for patients in need of protein therapeutics,’ says Paschalis Alexandridis from the chemical and biological engineering department at the University of Buffalo, US, whose work includes pharmaceutical formulations. He adds that Goto’s work demonstrates the versatility of solid-in-oil nanodispersions as a platform for enhanced transdermal delivery of protein therapeutics and vaccines.

Goto and his team say that in theory such dispersion could be used for any drug that is soluble in water and can form a water-in-oil emulsion. They hope to be able to produce a transdermal vaccine in the future.