New cheap and reusable foam can be broken down by heat, light or a magnetic field 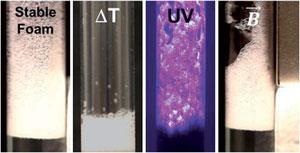 From left to right: foam before and after an increase in temperature, UV irradiation and exposure to a magnetic field

The first example of stable and environmentally friendly foam that can be broken down by any one of three external stimuli has been developed by an international team of scientists.

Foams are commonly applied in the clean-up of chemical spills, where they are sprayed over large areas to prevent evaporation of volatile and harmful organic materials. While this demands stability, the foam then needs to be destabilised for transport due to its voluminous nature, often accomplished by the addition of an anti-foaming agent. The resulting liquid mixture can then be removed and the components recovered. Recent studies have tried to create stable foams which can be destabilised by external stimuli to remove the need for the addition of extra chemicals.

Orlin Velev and Stephanie Lam of North Carolina State University have collaborated with Anne-Laure Fameau from the French National Institute for Agricultural Research, to pool their multidisciplinary backgrounds in foams and emulsions, and colloids. Their system is built upon the simple and green surfactant, 12-hydroxystearic acid (12-HSA), which is derived from a sustainable, plant-based material. Like most surfactants, when shaken in water, 12-HSA will form stable foam which collapses at elevated temperatures (~45°C).

Addition of carbon black and carbonyl iron particles further stabilise the foam. They also introduce two new mechanisms for its destruction. UV light makes the photosensitive carbon black particles generate heat, and application of a magnetic field causes the carbonyl iron particles to move and distort the foam structure, the net result of either being the foam’s collapse. ‘We can now destroy environmentally friendly foam with light, with no need for additional chemicals or even physical contact,’ says Velev. ‘Even better, it is cheap and reusable.’

‘The complex microscopic interplay between the colloidal particles, surfactants and interfaces involved in the simple approach is critical for its macroscopic properties, including the response time and extent of destabilisation,’ comments Anderson Ho Cheung Shum, an expert in emulsion-templated materials at the University of Hong Kong. ‘A fundamental understanding of this topic will likely inspire new ways to manipulate stability in other soft matter systems.’

Velev adds that while this is a valuable proof of concept, this specific system will not be cleaning up an oil spill anywhere soon. But using these principles, research is on-going into other stimuli-responsive soft matter.