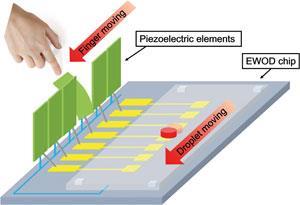 Researchers in the US have demonstrated that mechanical energy from a human hand can power a microfluidic device.

The behaviour of liquids on a charged dielectric surface can be controlled by passing a current through that surface, known as the electrowetting on dielectric phenomenon (EWOD). In digital microfluidic devices, individual droplets containing samples or reagents are manipulated, allowing the controlled movement and mixing of reagents in different droplets. However, the need for a bulky external high-voltage power supply currently limits the potential application in biomedical devices and optics.

Now, Chen Peng and colleagues at the University of California in Los Angeles have converted mechanical energy pulses, made by bending a series of piezoelectric elements with their fingers, into voltage pulses that can power an EWOD device.

Using this effect in an EWOD device was not without its challenges, adds Peng. ‘Piezoelectricity creates voltage but little current. An EWOD device operates with voltage, but nevertheless the current should be enough to charge the capacitors on the device. We had to carefully consider conflicting aspects of the EWOD devices, including the capacitance, actuation voltage and robustness, to assure reliable actuation of droplets using mechanical-to-electrical energy conversion.’

Aaron Wheeler, a digital microfluidics expert at the University of Toronto in Canada, can see the potential for powering EWOD devices in this way: ‘the idea of using piezoelectric potentials for droplet manipulation is exciting – one can imagine many different applications of ‘passive’ devices not requiring external power supplies for operation’.