There are vast amounts of silicon locked in the Earth’s crust as silicate minerals, but extracting it requires extremely harsh conditions. That could now change, thanks to pioneering work by Ken Sandhage and his team of materials scientists at Atlanta’s Georgia Institute of Technology in the USA. They have found a simple method of converting frustules - the intricate silica-based skeletons of common single celled photosynthetic organisms called diatoms (see image) - into pure silicon structures with many applications.
Prizing silicon and oxygen atoms apart needs the high temperatures found in a carbon-arc electric furnace, and plentiful supplies of wood, charcoal or coal. At around 2000oC, hot carbon reduces silica to liquid silicon, which on cooling produces 98 per cent pure metallurgical grade silicon. Further refining affords ultra-pure silicon for the electronics industry. 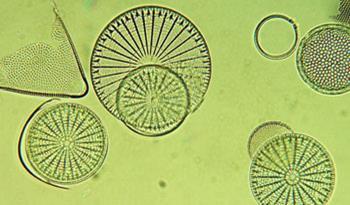 But at a mere 650oC, Sandhage and his team found that magnesium gas can reduce the intricate glass frustules of dead diatoms to a mixture of silicon and magnesium oxide. The latter dissolves in hydrochloric acid, leaving pure silicon nanostructures that faithfully replicate the original frustule’s beautifully sculptured shape.

It’s a gas
The Atlanta team thought that the high surface area and open 3D porous structures of these silicon frustule replicas could make them ideal microscopic gas sensors. They tested the idea by attaching platinum electrodes to a single silicon frustule, and applying a small voltage. Unlike insulating silica, silicon is a semiconductor which can carry varying amounts of electrical current.
Exposing the set-up to an argon carrier gas stream containing nitric oxide (NO) markedly reduced current flow through the frustule. The sensor easily detects minute NO concentration changes of just a few parts per million, and the sensor’s response and recovery times are much faster than equivalent sensors that have been fabricated from more conventional flat porous silicon wafers. 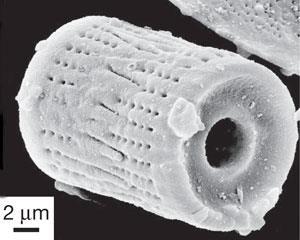 The Atlanta team also found their silicon frustules luminesce strongly in UV light if they were first partially oxidised by immersion in water for 40 days. This could form the basis of other gas sensors, as it is known that luminescence from porous nanocrystalline silicon is affected by the presence of trace gases: it decreases with methane, but increases with carbon monoxide.