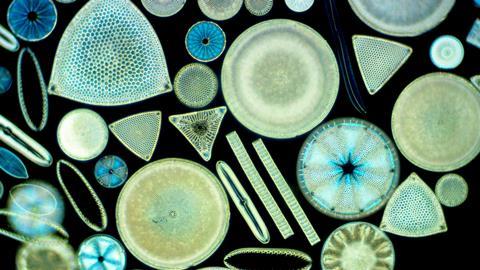 The discovery of three new proteins involved in controlling the formation of the intricate patterns of nanoscale pores in diatom shells opens the path towards manipulating the process to structure materials. These uses could include patterning in meso- and macroporous materials for photonics, catalysis and sensors.

Diatom shells pose an interesting technical challenge. These single cell algae produce their nanoscale-patterned porous silica walls at ambient temperatures within their cells, whereas scientists would need high temperatures and aggressive chemicals to produce something similar, and cannot reproduce all their intricacies. These shells are also a challenge for fundamental research, as it has proven extremely difficult to pin down the molecular mechanisms involved. 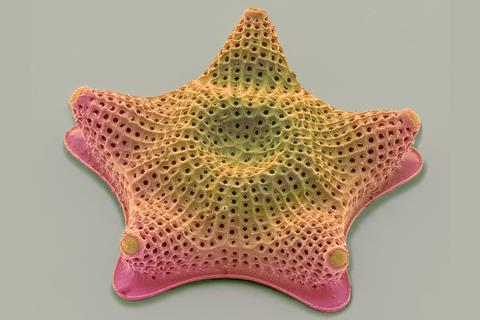 Now the group of Nils Kröger at the Technical University of Dresden, Germany, has identified three key proteins in the silica deposition vesicle (SDV), the cellular compartment that produces these structures. After comprehensive proteomics studies they narrowed down the search to dozens of proteins that looked promising, of which three had the ankyrin sequence which is commonly found in protein–protein interactions.

These three proteins appear to be ubiquitous in diatoms and specific to them. The researchers then produced three mutant strains of the diatom Thalassiosira pseudonana, each lacking one of these proteins, and observed that each displayed a characteristic disturbance in the pore pattern.

‘With this work we have made a huge step forward in identifying the protein-based machinery that control silica morphogenesis in the SDV,’ Kröger tells Chemistry World. ‘Although quite a bit further analysis is necessary, we start seeing the light at the end of the tunnel. Having the SDV in hand will enable studying its properties and biogenesis in ways that were previously unimaginable.’ 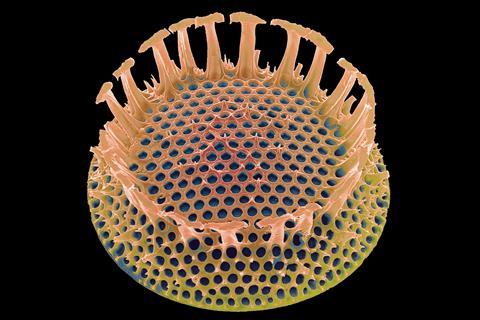 The structures of diatom shells varies significantly between different species

The researchers interpret the findings in the context of a hypothetical model of pore formation by liquid–liquid phase separation involving the formation of nanodroplets. In this view, the knockout disturbances observed would suggest that one protein controls the timing of droplet formation in relation to that of silica deposition. The other two are mutual antagonists that control the lifetime of these droplets.

Assaf Gal from the Weizmann Institute at Rehovot, Israel says ‘this work is significant since it is the first time we have evidence that shows specific proteins controlling the morphology of diatom silica’.

While the proposed mechanism remains hypothetical, it offers clear routes for experiments to test the theory and to look for the missing receptors that these proteins interact with – presumed to be embedded in the vesicle membrane. Previous discoveries had revealed proteins and polyamines that can trigger silica deposition in vitro. These new diatom proteins are the first, however, to have a proven and specific effect on the pattern formation in vivo and thus open the way to further experimental manipulation of these patterns.

Carole Perry from Nottingham Trent University predicts that this could eventually lead to patterning applications. ‘The research is an elegant example of how improved understanding of an organism’s natural biochemistry has the potential to generate tailorable materials using environmentally-friendly synthesis conditions with wide applicability in sensing and separation technologies.’