DNA folds up into a synthetic ion channel 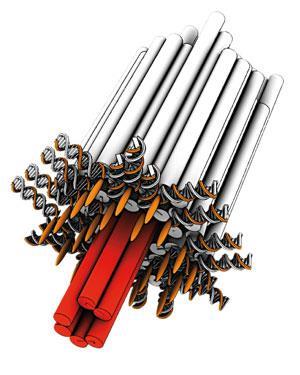 A model of the synthetic ion channel. Cholesterol anchors are orange and the transmembrane stem is red

An artificial ion channel that spans a synthetic lipid membrane has been created using DNA origami by researchers in Germany and the US. The nanometre-scale channels form by template self-assembly and are glued in place by cholesterol groups in the membrane. Electrochemical tests show gating akin to natural ion channels.

Friedrich Simmel, of the Technical University of Munich, and colleagues hope to create synthetic mimics of protein channels that act as chemical gatekeepers between the interior and the exterior of the cell. These channels carry ions, water and other substances across the otherwise impermeable cell membrane in response to cellular conditions and demands. Simmel’s group took alpha-haemolysin as their inspiration for creating an entirely synthetic channel of similar shape.

The team used scaffolded DNA origami to initiate self-assembly of the channel from its component parts. In DNA origami, a strand of DNA is folded by exploiting the pairing of complementary bases to create three-dimensional nanoscale structures. Smaller strands act as ‘staples’, with their specific sequences controlling where the folds are fixed. The product is a channel consisting of a stem that penetrates and spans the lipid membrane and a barrel-shaped cap. The team adds that 26 cholesterol groups then act as the glue to fix the 42nm channel in place in the membrane.

Natural channels often display gated behaviour in which they can be switched between two conformations, one that is open to the ‘target’ ion, water or another chemical and one that is closed. The team has found that their artificial channel displays similar behaviour, but it could have been that this emerged from random thermal fluctuations rather than a specific process. In order to demonstrate that this is not the case, the researchers made three mutant variants of their channel in which a short strand of the DNA protrudes at different positions from the 2nm core of the channel.

They found that the gating behaviour was much more pronounced in the three mutants and the gating time depended on the length of the protuberance, suggesting that fine structural details underpin the process, not thermal fluctuations. Indeed, some ‘wild’ type channels without the mutations were shown not to act as gates at all, similarly precluding the notion that the channels just randomly opened and closed.

Ulrich Keyser of Cambridge University has independently been working on DNA origami nanopores. He recently published details of a nanopore in a solid-state membrane and is excited by this new work. ‘This is, to my knowledge, the first completely man-made lipid membrane nanochannel or nanopore ever made,’ he says. ‘This is a dream pursued for a long time and opens the avenue to so many other possible applications it is hard to choose which is more exciting.’ Among those applications might be personalised medicine for channelling specific drugs to target cells in the body or perhaps even interfacing such structures with RNA or enzymes to create nanorobots.