Researchers use tiny gold islands to position DNA origami, in another step towards 'self-assembled' nanoelectronics

Chemists in the US have developed an easy way to integrate the ’bottom up’ assembly of DNA origami with the ’top down’ patterning of low cost lithography. The method, which involves sticking pieces of DNA to prepositioned gold islands, might help researchers in their bid to use DNA origami for nanoelectronics.

DNA origami is a means of folding DNA strands into something like a pegboard, onto which different molecules can be attached. In principle the origami can self-assemble into circuits with features just a few nanometres in size, but so far researchers have had difficulty controlling them because the origami are made in solution, so when deposited on a surface they can go everywhere.

The distance between components in electronics such as flash memory devices has shrunk to just tens of nanometres in recent years, and could drop even further, explains Hongbin Yu, a member of the research team at Arizona State University. One way to position components such as DNA origami that could be used in nanoelectronics is to go over the surface with highly precise lithography, but lithography at this scale requires expensive equipment. ’The cost of the tool to produce such features is so high only a handful of companies can afford them,’ says Yu. ’Using DNA self-assembled structures on a patterned surface is an exciting way to reach such small dimensions with relatively low cost.’ 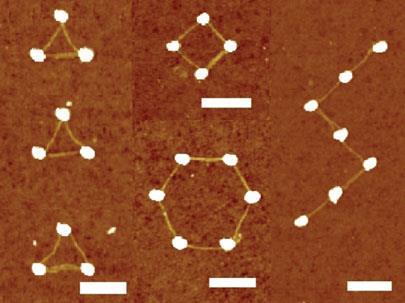 In the new technique the researchers, led by Yu’s colleague Hao Yan, modify the ends of DNA origami tubes with sulfur-containing ’thiol’ groups, which can bind to gold. Using low-cost lithography, they then position two gold islands, just tens of nanometres in diameter, where they want the origami to go. When they deposit the origami, the ends of a single tube attach to the two islands, thereby forming a link in the right location.

’This work is important in that it is difficult to fabricate devices whose salient features span sub-nanometre to millimetre scales in length,’ says William Shih, an expert in DNA nanotechnology at Harvard University, Cambridge, US. ’Success will lead to more sophisticated and powerful electronic devices than are possible today.’

’Yan’s group seems to have struck a pretty good compromise, and they have come up with a good solution that will find application when we want to arrange 1D structures, like tubes, on a surface,’ says Paul Rothemund at the California Institute of Technology, US, who invented DNA origami.

The researchers now plan to attach molecules such as carbon nanotubes, semiconducting nanoparticles or nanowires to the DNA origami to create functional networks with their gold islands.