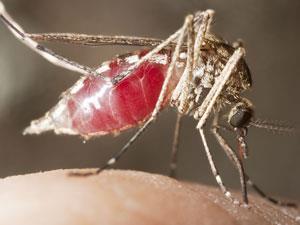 Scientists in Japan have developed a technique that could diagnose malaria just one day after infection.

It is estimated that in 2010 over 200 million people were infected with malaria and over 600 thousand people died from it. Malaria is caused by Plasmodium parasites that are transmitted by mosquitoes. The parasites invade red blood cells, eventually causing the cells to rupture and release the parasites so they can infect other cells.

Diagnosing malaria as soon as possible maximises the effectiveness of treatment. Light microscopy is currently used in clinical settings to diagnose malaria but is not very effective at catching the low levels of parasite present during early stages of infection. It involves analysing a blood smear for infected red blood cells and relies on a small sample of blood containing one of only a few infected red blood cells a patient may have.

Now, Nicholas Smith and colleagues at Osaka University have shown that Raman spectroscopy can detect changes in haem and hemozoin in plasma samples to identify malarial infection. Haem and hemozoin are chemicals released into the bloodstream when infected cells rupture. ‘By looking for the parasite by-product which spreads through the serum, instead of the parasite itself, we are effectively sampling a much greater volume and could provide a more robust and automated detection method,’ says Smith. The team demonstrated that their technique could detect raised levels of hemozoin in infected mice just one day after infection.

Torsten Frosch, an expert in Raman spectroscopy at Friedrich Schiller University Jena in Germany, says ‘resonance Raman spectroscopy is an extremely capable technique for selective localisation of the malaria pigment, hemozoin, and will provide a new diagnostic tool for early stage diagnosis of malaria’.

The team now want to use Raman to analyse immune responses to hemozoin, and maybe help produce a vaccine for malaria.