Try to imagine the frustration of having a cutting-edge technology at your disposal which promises to reduce greenhouse gas emissions - but no batteries to power it.

Vehicle manufacturers don’t have to imagine it. They all have the know-how to build plug-in hybrid electric vehicles (PHEVs), which run primarily on electricity but also have combustion engines for driving longer distances. But that one final - and essential - piece of the PHEV puzzle is missing: the batteries just aren’t good enough.

But US auto giant General Motors is betting that chemists are close to solving the puzzle, by developing rechargeable batteries that are safe, robust, long-lasting, and inexpensive.

GM is investing heavily in two battery companies with rival technologies in the hope at least one of them can power its planned Opel Flextreme hybrid car, unveiled at the Frankfurt IAA auto show last week. The Flextreme is slated for a 2010 launch, along with its counterpart hybrid in the US, the Chevrolet Volt. Joe Lograsso, manager of hybrid energy storage systems for GM, hints that meeting the goal will be challenging, with battery cell development now entering a key phase. ’I think the next 12 months will be critical,’ he told Chemistry World.

Conversely, PHEVs are likely to use lithium ion batteries, already widely used in laptop computers and mobile telephones. These are charged by using an electrical potential to push lithium ions through an electrolyte from cathode to anode, where they intercalate with a crystalline material (such as graphite). Electricity is discharged through an external circuit when the ions return to the cathode. 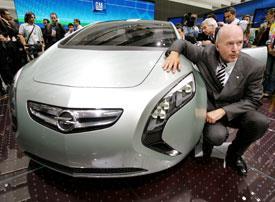 Yet Li ion batteries are less durable and less safe than NiMH batteries, and can be prone to overheating and fire, a risk that can increase in the larger, higher density cells needed to power cars. The batteries must also have a life of at least 10 years, added Lograsso.

That’s where the competing battery developments come in. They aim to refine the lithium ion battery within the next couple of years so that it fits the needs of the 21st century motorist.

First on the grid is A123Systems of Watertown, Massachusetts, co-founded by MIT materials scientist Yet-Ming Chiang. The company is developing cells using a proprietary cathode for a lithium ion cell made from a ’nanophosphate’ material - particles of doped lithium iron phosphate (LiFePO4) less than 100 nanometers in size, coated onto an aluminium electrode. Traditional lithium ion cells use cathodes with particle size around 5 micrometres in size, said Ric Fulop, co-founder and vice president of business development at A123. What’s more, the doping improves the material’s conductivity by several orders of magnitude, he added.

The A123 anode is carbon based, but is optimized with ’special additives’ making it different from traditional graphite anodes, Fulop said. ’A123’s technology offers both higher power per weight/volume and better abuse tolerance - [in other words] safety.’

The company already uses the technology to produce 10 million cells per year for smaller applications, such as power tools. ’There is a lot of engineering work ahead of us . to take small cells into larger cells,’ conceded Fulop. If that work goes well, A123’s batteries would ultimately be manufactured for GM by Frankfurt, Germany-based Continental Automotive Systems.

But GM has also has signed a development contract with Compact Power, of Troy, Michigan, which would produce battery packs from cells manufactured by its parent company, Korean-based LG Chem.

Their cathodes use lithium manganese oxide (LiMn2O4), a material that has traditionally been ruled out because it could not survive at least ten years of use demanded by car manufacturers, said Mohamed Alamgir, Compact Power’s research director. ’But using proprietary approaches, we have been able to improve this so that our cells based on this cathode are state-of-the-art with respect to performance, life and cost.’

The cathode is not the only factor determining performance and cost. Compact Power’s technology also uses a ’proprietary separator that provides protection from internal shorts’, added Alamgir, a problem responsible for recent massive recalls of small format lithium-ion laptop batteries.

Lograsso is optimistic that at least one of their partners will come up with a viable battery solution. But he says GM is still keeping its options open: ’This field is developing very quickly,’ he said. ’We are seeing other companies develop solutions and they are staying in the chase too.’

Consumer demand is expected to be huge when automakers are finally able to bring PHEVs to market. Suba Swaminathan, team leader of the North American Energy & Power Systems Group at global consulting firm Frost & Sullivan, says annual battery market turnover for powering hybrid autos is expected to reach $1.5-2.0 billion in the next 10 years.