A new study finds the electron is spherical, which has deep implications for the standard model of physics

UK scientists have made the most accurate measurements to date of the shape of the electron and found - contrary to predictions that it would be aspherical - that it remains round. 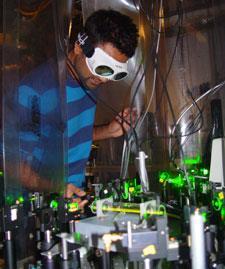 Particle physics currently explains phenomena according to the standard model. However, there are some big puzzles that it cannot solve, including why little antimatter is found in the universe. Physicists believe the standard model is incomplete and the dearth of antimatter must be explained by new, undiscovered particles.

However, while the standard model predicts that the electron will be almost perfectly round, any new model that involves additional particles should mean that electrons will appear slightly aspherical because of a distortion characterised by the electron’s electric dipole moment (EDM), a measure of the distribution of the electric charge across the electron.

Previously, the best measurements of the electron’s EDM were made in 2002 by conducting experiments on atoms.1 Now, Ed Hinds and his team at Imperial College London, have made measurements that are one and a half times more sensitive by searching for the EDM in ytterbium fluoride (YbF) molecules, which offer much greater sensitivities and avoid the systematic errors present in atomic experiments. However, while the measurement is an improvement, it has not revealed the elusive EDM.2

The team investigated the electron’s EDM using a laser to prepare the spin of YbF molecules. If the direction of the spin of the electron in the YbF molecules changes following the application of an electric field then it would indicate an EDM. However, the team observed no such change.

But David DeMille, a physicist at Yale University, US, who previously made the most accurate measurements of the electron’s EDM, says: ’On its face, the actual improvement is rather small while typical theoretical predictions vary from just at the current limit to a few orders of magnitude smaller. However, this paper represents the first of what many in the field believe to be a coming wave of potentially much larger improvements.’