The mechanism of an unusual carbon bond cleavage reaction in the biosynthetic pathway of phosphinothricin tripeptide (PTT) - a naturally occurring herbicide and antibiotic compound - has been elucidated by US scientists1. The work may allow scientists to reengineer the compound into synthetic and more potent herbicides and antibiotics that overcome the problem of resistance, say researchers.

In 2007, a unique enzymatic step in the biosynthesis of PTT involving the cleavage of a carbon-carbon bond, which converts 2-hydroxyethylphosphonate (HEP) to hydroxymethylphosphonate (HMP), was reported by a group led by microbiologist William Metcalf in the US2. However, they had no idea of how the enzyme worked, what its three dimensional structure looked like, or how it carried out the chemistry.

Now, building on the original discovery, Metcalf and an interdisciplinary team at the University of Illinois at Urbana-Champaign, Urbana, US have carried out detailed mechanistic analysis of the enzyme and also solved its three dimensional crystal structure using x-ray crystallography. ’What we have shown is that it is a mononuclear non-haem iron (II)-dependent dioxygenase enzyme that contains a bi-domain fold which is characteristic of the cupin superfamily,’ says structural biochemist and co-author, Satish Nair. ’It’s the first time that carbon bond cleavage has been shown to occur via iron chemistry.’ 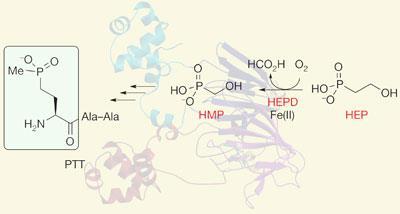 However, Nair points out that the mechanism of this unprecedented reaction is not yet certain and more work is needed to figure out the different states of the iron and the intermediates in the reaction path. ’We have some mechanistic proposals for how this is done, but there’s no proof.’ Based on indirect evidence, however, the researchers think HEP uses a mid-valent metal-superoxide intermediate to cleave an aliphatic C-H bond in its substrate and initiate its C-C cleavage reaction. Unlike other members of the cupin family, additional cofactors or cosubstrates are not required for the oxidative consumption of HEP.

’This paper describes the exciting new activity of a C(sp3)-C(sp3)-bond cleaving enzyme,’ says biochemistry expert J. Martin Bollinger Jr at Penn State University in Pennsylvania, US. ’It is a very nice contribution to our understanding of the myriad ways in which nature uses oxygen and transition metals to carry out challenging oxidation reactions with exquisite specificity and economy.’

Nair says this work could be important for the discovery of new PPT derivatives that could be used as more potent antibiotics and herbicides. ’One of the biggest problems in the field of antibiotics and herbicides is resistance,’ says Nair. ’Knowing how enzymes in a particular biosynthetic pathway work, and what their three dimensional structures are, we can reengineer their specificities to derive molecules that don’t exist in nature and thus stay one step ahead of the evolution of resistance,’ explains Nair.