We’ve had microfluidics. We’ve even had nanofluidics. But now, scientists have gone a step smaller by pushing femtofluidics into the realms of possibility.1

Droplet microfluidics enables assays and reactions to be performed in droplets of reagent that are just a few nanolitres or picolitres in volume. The main advantages of this are that reactions can be performed in a massively parallel manner using hardly any reagent, and further miniaturisation to give femtolitre droplets promises to enable even higher-throughput with even lower reagent use.

The first devices capable of generating femtolitre-sized droplets were developed in 2005,2 but since then their use has been severely limited by a lack of technology for the subsequent manipulation of the droplets. Femtolitre droplet manipulation is challenging because at smaller volumes, the surface area-to-volume ratio of the droplets increases, leading to problems with reagent adsorption, and the balance of forces that governs the physics of droplet movement is drastically altered. 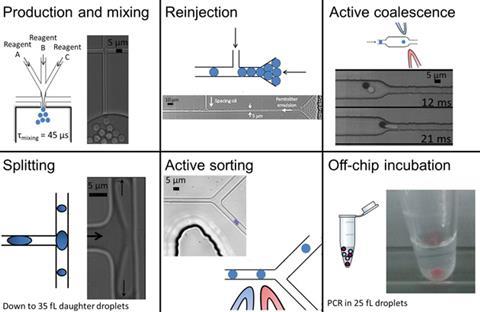 However, Marie Leman and colleagues from the French National Centre for Scientific Research (CNRS) in France have overcome these problems with clever device geometries, precisely located electrodes and carefully considered flow conditions to develop a series of devices that support all key droplet microfluidics operations – production, sorting, mixing, coalescing, splitting, etc – to be performed on droplets that are just a few femtolitres in volume. They even performed PCR in the droplets, showing that they can be successfully used for quantitative biological assays. This paves the way for the development of a whole host of ultrahigh-throughput femtolitre droplet-based devices, which would use up to one billion times less reagent than standard microtitre plate-based systems.