A micro-dispensing system to print artificial fingerprints for forensic tests

An on-demand system to print artificial fingerprints has been developed by US scientists. The fingerprints could be used to ensure that detection equipment for explosives and narcotics, such as those used in airports and federal prisons, are working as expected.

Jessica Staymates and her team at the National Institute of Standards and Technology, Gaithersburg, incorporated the oily substance found in fingerprints – sebum – into explosive test materials to provide a realistic challenge for trace detection technologies. ‘When someone handles explosive or narcotics materials, they inevitably contaminate themselves, their clothing and belongings with micrometre-sized particles of the material,’ explains Staymates. ‘It is generally believed that these trace residues are commonly spread via fingerprints.’

Since sebum is oily and viscous, it is difficult to deposit with traditional methods, such as the inkjet printing that is normally used to create test materials, says Staymates. So, the team used a different technique to deposit small amounts of sebum and particles in a suspension. First, they dissolved the sebum in heptane so that it remained liquid at room temperature. Then, they suspended particles of a military explosive (cyclotrimethylenetrinitramine – RDX) in the sebum–heptane mixture and added polyisobutylene, which kept the RDX particles suspended in the mixture. The team deposited the mixture with a jet system, which consisted of a pneumatically-controlled piston with a ball-shaped tip that rapidly pushed the mixture through a narrow opening. Once printed, the solvent evaporated to leave the sebum and particles behind. Printing a suspension helps to prepare realistic samples with a particle size distribution that mimics actual explosive or narcotic mixtures, says Staymates. 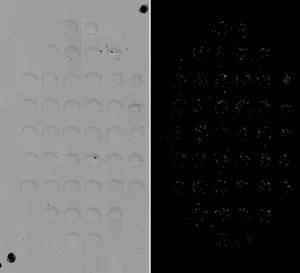 ‘A potentially important aspect of such a printing process is the ability to generate a “depletion series” of fingerprints,’ says Tim James, a crime scene science specialist at Teesside University, UK. He explains that the current method for doing this is to deposit sebum over the fingers by rubbing hands together after they have been passed through hair or rubbed on the forehead. The individual fingers are then pressed onto a surface 10 times, during which there will be less material deposited with each touch. The problem with this method is that it is impossible to know the initial concentration of contaminants on the fingers and it is difficult to keep the pressure used by a finger on each deposition. ‘By being able to control the concentration of the contaminants in the printing process, a reproducible and known concentration can repeatedly be deposited,’ he says of Staymates’ method. ‘Thus, a more accurate determination of the sensitivity of potential enhancement techniques could be determined.’

‘The most intriguing avenue that this work offers is the possibility for investigating several aspects of fingermarks and fingermark analysis, such as new technologies, inter and intra-individual variability and age, eliminating the variable connected to inevitable compositional difference between fingermark replicates,’ says Simona Francese from Sheffield Hallam University in the UK, whose recent work involved using mass spectroscopy to determine the sex of a perpetrator from the peptides in fingerprints left at a crime scene. She adds that if an accurate measurement of the sample mass dispensation can be provided in the future, the method could help to advance the understanding and development of fingermark analysis.

Staymates’ future plans include pilot studies using the artificial fingerprints with explosive materials to test a small subset of trace detection equipment. ‘We are also working on determining whether the artificial sebum we use in these studies ages at the same rate and in the same manner as real fingerprints,’ she says.