Fireworks and the spread of particulate matter 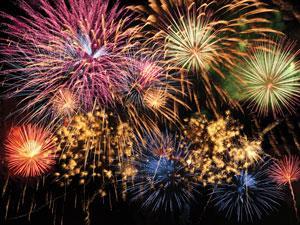 A detailed study on the spatiotemporal distribution of atmospheric pollutants arising from the wide scale use of fireworks has been carried out by scientists in China, with a view to highlighting related environmental and health concerns.

Fireworks and firecrackers are used extensively across the globe in all manner of celebrations, though few match the sheer scale of Chinese New Year. They generate a variety of contaminants, including gases such as carbon monoxide, sulfur dioxide and nitrogen oxide, in addition to aerosols of microparticles known as particulate matter.

Though research groups around the world have investigated various aspects of firework detonation on the local atmosphere, the study from Wei Gong’s research group at Wuhan University, is on a larger geographic scale, with more regular time intervals, than ever before. The team also present the first detailed data on the vertical atmospheric distribution of PM2.5 and PM10 levels (particulate matter with an aerodynamic diameter of less than or equal to 2.5µm and 10µm, respectively). These suspended particles are important as they can affect climate and are also respirable, affecting both heart and lung function. In 2010, the World Health Organization’s global burden of disease report indicated that ambient particulate matter ranked fourth out of the main risk factors relating to deaths in China.

Gong’s team recorded data from 10 air monitoring stations around Wuhan, the capital of Hubei Province with a population of 8 million. They also used a remote sensing technique known as Lidar, which employs the detection of reflected laser light by aerosol particles, to monitor plumes of particulate matter emanating from fireworks displays. Gong’s analysis of this data estimates that PM2.5 emissions from fireworks in Wuhan during the testing period totalled between 39.57 and 43.51 tons.

‘We have found that air quality is seriously affected by this human activity and the effects are much greater than we previously thought,’ says Gong. ‘The highest PM2.5 concentrations measured were up to seven times greater than on ordinary days. It is time to alert the public to the negative effects of our cultural customs.’

Gong may find that the public don’t take much convincing to give up fireworks. 81% of respondents to a Shanghai resident’s survey were in support of a year-round fireworks ban to improve the city's air quality. And on Wednesday, Beijing's government sent text messages encouraging people to cut down on the number of fireworks they set off.

Dilip Chate, an expert in atmospheric aerosols at the Indian Institute of Tropical Meteorology, says this is an interesting study. ‘The dispersion of human-induced emissions during any fireworks display mainly depends on weather parameters, and it would be interesting to see this discussed based on real time parameters,’ he adds.

Gong intends to continue his research in the remote sensing of atmospheric pollutants, to investigate larger and more complex systems.