Researchers in Korea and Japan have fabricated films of graphene - planar sheets of carbon one atom thick - measuring tens of centimetres. The researchers engineered these large graphene films into transparent electrodes, which were incorporated into touchscreen panel devices. The new work represents another milestone in the astonishing technological advance of graphene from its initial isolation only a few years ago. Experts predict that graphene will be found in consumer products within a couple of years. 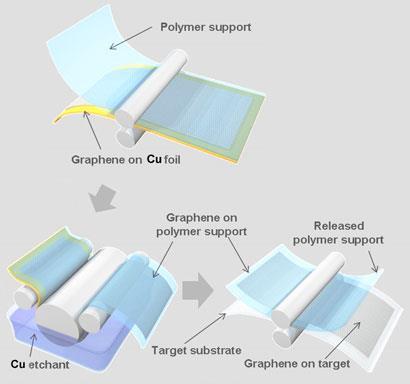 The researchers used this technique to create a rectangular graphene film measuring 30 inches (76 cm) in the diagonal. The graphene was doped by treating with nitric acid and in this form the graphene sheet can act as a large, transparent electrode and was demonstrated to work in a touchscreen device.

Typically, transparent electrodes used in such applications are made from indium tin oxides (ITO). The researchers say that the graphene electrode has better transparency and is tougher. ’The price of indium has increased by a few times over the past decades and this will be more serious as markets for display and solar cells expand,’ says Ahn.’In addition, oxide materials like ITO are usually fragile and weak.’ Because of this, ITO-based touchscreens have a finite life span, whereas, says Ahn, a graphene-based screen should last essentially forever.

Left: A transparent graphene film transferred on a 35-inch PET sheet. Right: A graphene-based touchscreen panel connected to a computer

’In addition, the graphene production needs just a tiny amount of carbon sources without any rare materials, and the copper substrate is recyclable, so it is much more environmentally friendly than ITO production.’

Andre Geim of the University of Manchester in the UK, who is widely credited as being the founding father of modern graphene science having discovered isolated graphene around five years ago, says the new work demonstrates the astonishing rapidity with which graphene technology has advanced. ’This clearly shows that graphene is no longer wishful thinking as far as industrial applications go. People have gone from lab-scale to industrial-scale production unbelievably quickly. Within two years we will have consumer products.’