Scientists have created the first stable magnesium(I) compounds - a metal ruled, to date, by the +2 oxidation state

Chemists have created the first stable magnesium(I) compounds - a breakthrough for a metal whose chemistry, like fellow group 2 metals such as beryllium and calcium, is ruled by the +2 oxidation state. The two new complexes, which feature two magnesium(I) ions bonded in a Mg22+core, were made by Cameron Jones, Andreas Stasch and colleagues at Monash University, Australia. 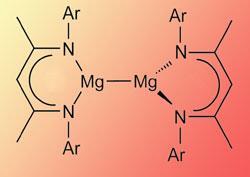 Jones and Stasch made the first complex by attaching to the magnesium bulky guanidine-based ligands previously developed by the group. From a precursor in which two magnesium(II) ions, with bulky ligands in place, were separated by two bridging iodine atoms, the team added an excess of reducing potassium metal to make the target compound.

’It was quite a surprise to us that we could make the complex by simple reduction,’ Jones told Chemistry World. ’You sometimes see over-reduction [to magnesium metal] using potassium. But if you stop the reaction after 24 hours, you get the compound you want.’ The team then used the same conditions to make a second complex, using well-studied ’Nacnac’ diketiminate-type ligands.

Robert Mulvey, head of inorganic chemistry at the University of Strathclyde, UK, was impressed by the work. ’The fact that the synthetic method employed, reduction of a Grignard reagent with elemental potassium, is so simple adds to the beauty and impact of the discovery,’ Mulvey told Chemistry World. ’This is a sensational result which undoubtedly will greatly increase activity in the area of Mg(I) chemistry.’

To confirm they had actually made a magnesium(I) complex, Jones first had to prove they not simply replaced the bridging iodines with hydrogens - in which case the magnesium atoms would still be in the +2 oxidation state.

’The ultimate proof would be to actually make the hydrogen-bridged complex, but we’ve not been able to do that yet. So we used crystallography, theoretical chemistry, and spectroscopy to prove we have magnesium(I). And we’ve now also shown that they act as reducing agents to a range of unsaturated substrates, which we’ll publish in due course.’

Jones says he now wants to make complexes of magnesium’s group 2 neighbours, beryllium and calcium, in the +1 oxidation state. ’We are also looking at complexes with three or more magnesiums bonded together,’ added Jones.