They're flexible, they're affordable, and they could usher in a solar power revolution 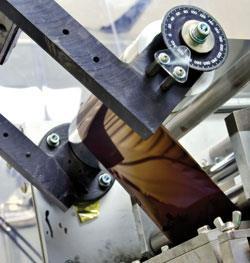 Reel-to-reel processing is lowering the costs of solar cells

They’re flexible, they’re affordable, and they could usher in a solar power revolution. That’s the claim from fledgling US company Nanosolar, who started commercial production of their thin-film solar cells in December 2007.

The cells are printed onto a flexible backing on a reel-to-reel production line, one of many innovations which mean that the capital costs of setting up a solar power station could for the first time rival those of a coal-fired plant.

Nanosolar’s cells don’t use silicon, but instead rely on a light-absorbing material called CIGS, a thin film semiconductor made of copper, indium, gallium and selenium. ’Silicon cells have a high cost because of the purification steps needed from silicon dioxide,’ said Ken Durose, who studies photovoltaic materials at Durham University, UK. ’The thin-film model has been around for many years, with the promise to slash costs very significantly.’

’Efficient CIGS solar cells have been known for at least 10 years, but the problem has been to make them cheaply,’ added James Durrant, who researches solar cells at Imperial College, London, UK. ’So far, CIGS cells made by cheaper routes have taken a big hit in their solar energy conversion efficiency.’

’It’s the semiconductor ink we have developed which puts us into this unique position,’ Nanosolar CEO Martin Roscheisen told Chemistry World. CIGS cells have traditionally been made using vacuum deposition techniques - a process more complex, more costly and less amenable to high-throughput commercial production than printing.

Instead, California-based Nanosolar pre-mixes the CIGS ingredients into nanoparticles , which are suspended in an ink. ’This homogenous solution can then be deposited over any size of a substrate,’ said Roscheisen. The particles are then heated to melt them into a continuous layer.

’Using nanoparticles and printable inks is all in vogue now - but the physics and chemistry was worked out in the 1960s and ’70s,’ said Durose. ’Very small particles have a lower melting point than bulk material, which I think is key to this technology. The high vapour pressure of solid selenium is the other issue that the company has obviously overcome,’ he said.

Materials like CIGS have a key advantage over silicon for making efficient thin-film solar panels because they are inherently better at absorbing light. ’A few microns of CIGS makes an excellent, black, light absorber - an equivalent silicon film would only be a pale grey/blue,’ said Durrant.

How the cells work

Nanosolar’s cell is made of four separate layers applied to an aluminium foil base. Light passes through a transparent zinc oxide electrode, and is absorbed by the CIGS semiconductor, forming an electron-hole pair. The electron crosses the unidirectional P/N junction into the zinc oxide electrode. Returning electrons pass back through the molybdenum electrode into the CIGS layer, where they recombine with a hole. 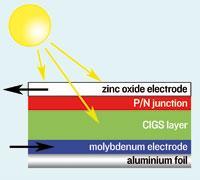 Nanosolar believes its technology will allow them to sell solar panels at just $1 per Watt of power. While comparing the cost of energy produced from coal and solar is difficult - partly because solar energy production depends heavily on how much sunlight the panel receives over its lifetime - analysts at Canadian investment brokers National Bank Financial have calculated that a panel priced at $1 per Watt could produce power at under 10 cents per kilowatt hour, close to the
5 cents per kilowatt hour of coal.

Nanosolar boast that their order books are full until 2009 - but that’s not an uncommon situation among solar cell manufacturers, points out Monique Hanis of the US Solar Energy Industries Association, based in Washington, DC. ’There’s more demand than supply, and demand is continuing to increase as more governments require the use of renewable energy,’ Hanis told Chemistry World.

And Nanosolar’s cells are certainly not the final word - not least because their key ingredient, indium, is in such short supply. ’Indium is a rare and expensive metal, costing around ?320 per kilogram,’ said Durose. ’For a 1GW array of cells, making the solar semiconductor just one micron thinner could save 50 tonnes of material.’

Durose himself leads a multi-university research project which hopes to do just that. In January, the team received
?6.3 million in funding from the UK’s Engineering and Physical Sciences Research Council to develop more affordable and sustainable thin film cell technologies.

’There is a very big potential for thin film cells to usurp silicon, although I expect the two will exist side-by-side,’ said Durose. ’I don’t think traditional silicon cell manufacturers will be worried by thin film, I think they’ll be excited by it.’