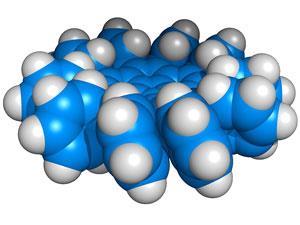 The dome-like structure of corannulene has been flattened by adding an unprecedented 10 phenyl rings to its rim. Corannulene is essentially a slice off the top of a buckyball, with five six-membered aromatic rings fused together. This geometry means that it forms a dome, not a circle, unless steric clashes around the rim prevent this.

The researchers from Boston College, US, and Nagoya University, Japan, were originally trying to increase their yield of the previously published penta-substituted corannulene. When they increased the amounts of the phenylboroxin reagent and palladium acetate catalyst and repeated the reaction four times, they were able to isolate the deca-substituted corannulene. They found that a p-chlorophenyl substituent gave the best yield (54%) of this highly strained molecule, as it prevented the newly added phenyl rings from reacting further.

It was not previously appreciated that the palladium-catalysed mechanism could overcome such steric strain. This could now be applied to the multi-arylation of molecules that were thought too crowded or even manipulation of their geometries to suit supramolecular chemistry.