A new kind of compound to treat hepatitis C is showing promise in early clinical trials. The treatment, being developed by Bristol-Myers Squibb (BMS), was found to be very effective at lowering viral load, both in a Phase I trial published this week in Nature, and in early results of a Phase IIa trial presented at the European Association for the Study of the Liver’s annual meeting in Vienna last week.

Current HCV therapy is not ideal. The standard treatment is with an interferon and the antiviral agent ribavirin, but is only effective in around half of all patients and is plagued with side-effects. Various new antiviral agents are under development, including protease inhibitors and polymerase inhibitors, and BMS-790052 works against a new target, the NS5A protein.

’If we are to replace interferon with small molecules, we would need at least two if not three, so we set out to look for new inhibitors,’ explains Nick Meanwell of BMS’s research team. ’We ran a chemical genetics screen, and found a single interesting inhibitor whose resistance mapped to the NS5A protein. We don’t know what this protein actually does - it’s very enigmatic! We took that lead compound, and after some very interesting chemistry we finessed out the pharmacophore, and that led to the final molecule which is now in clinical trials.’ 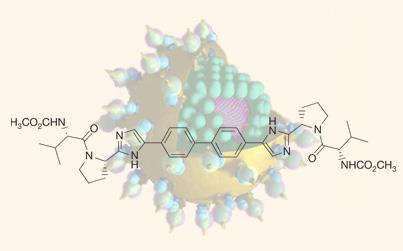 BMS-790052 could offer a new treatment option for hepatitis C

The hepatitis C virus has many different genotypes. The initial screen was run on type 1b, and BMS chemists got to work to find an analogue that was active more broadly. ’We had to understand how to inhibit type 1a, which was quite a challenge, but we solved it,’ says Meanwell. ’Typically, there is an effect on viral load by the 12 hour point, and at the highest dose we are reducing viral load in plasma by almost 99.99 per cent.’

The compound also seems to be effective against other genotypes. The next step, says Meanwell, is a combination study where it will be given alongside the company’s protease inhibitor BMS-650032, but without the standard interferon and ribavirin, which was given to patients in the reported trials. ’It’s a small study and very early days, but we hope to release results towards the end of the year,’ he says.

’It looks a most interesting compound,’ says Geoff Dusheiko of the centre for hepatology at University College London, UK. ’Other groups have worked on NS5A inhibitors that have not shown the same level of potency, which is crucial. It looks like it has fairly broad activity across HCV genotypes, which would also be an important breakthrough.’