From methane to liquid gold

Hydrocarbons may form in the mantle from methane

The world’s supplies of oil may be larger than we think - or at least that is what researchers from the US, Russia and Sweden are speculating now they have shown that hydrocarbons can be formed in the mantle from methane.

Hydrocarbons are generally thought to have a biological origin via the decomposition of ancient life over millions of years, hence the name ’fossil fuels’. However, there is another theory that suggests hydrocarbons may also be created from non-biological (abiogenic) sources. Previous experiments have shown that abiogenic methane could exist in the Earth’s upper-mantle and theoretical models have predicted that this could then be converted to heavier hydrocarbons.

Now, a team led by Alexander Goncharov at the Carnegie Institute of Washington in the US, say they have provided solid experimental data that support these predictions. ’What we found, for the first time, is the transformation of methane to heavy hydrocarbons like propane or butane, under upper mantle conditions,’ says Goncharov. 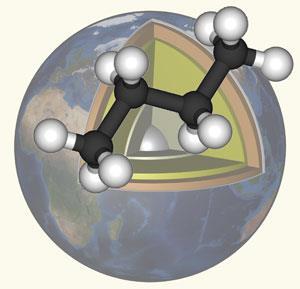 Some oil may have formed from non-fossil sources

The team mimicked conditions thought to exist in the upper-mantle and exposed methane to pressures of over 2 gigapascals, and temperatures between 1000 and 1500 kelvin using laser heated diamond anvil cells. By using in situ  Raman spectroscopy, the team were able to observe that the methane reversibly reacts to form very small yields of ethane, butane, propane, and molecular hydrogen and graphite.

’It’s a very straightforward and solid paper, and chemistry-wise, their analyses are all very good,’ comments Surya Prakash, a hydrocarbon expert at the University of Southern California, Los Angeles, US. ’But as an organic chemist, this reaction is not surprising because methane to ethane, or propane or butane, is a very easy conversion.’

Goncharov, however, suggests that the results were not entirely expected. Upper- mantle conditions are considered to be oxidising so the team added oxygen to their experiment in the form of magnetite (Fe3O4).   ’[Oxygen] is expected to suppress that kind of chemical reaction but we showed that even if you have mildly oxidised conditions with a diamond cell you still get the same reaction.’

Furthermore, the researchers recognise that this is just the first of many steps in building a case that supports an abiogenic origin of hydrocarbons. ’We are in preparation for doing more experiments with more complex systems, including minerals which are relevant for the upper mantle earth,’ explains Goncharov. ’An obvious consequence of our work could be that we might have more oil in the Earth than has been expected, but that’s highly speculative’ he adds.

However, Prakash points out that a question needs to be answered before the abiogenic theory of hydrocarbon formation from methane can be seriously considered. ’The question is, did the methane come from when the Earth was created or was it created later by biological sources?’