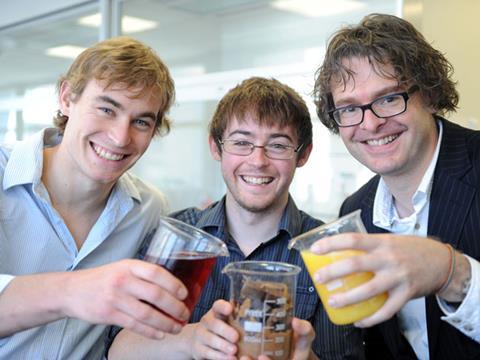 Fruit juice has been used by scientists in the UK to replace up to half of the fat content from cocoa butter and milk fats in milk and white chocolate.

Stefan Bon and his colleagues at the University of Warwick made a water-in-oil emulsion to replace the fat by adding fruit juices, water with added vitamin C or flat coke to chocolate formulations.

Cocoa butter gives chocolate its melt-in-the-mouth sensation and plays a crucial role in its texture, but manufacturers have been looking for ways to reduce its fat content. One way is to introduce air bubbles into the chocolate. This works for some chocolate bars when the consumer expects large bubbles, but scientists have been trying to produce smaller bubbles below 30µm in diameter to give a smooth sensation. Unfortunately, ‘air bubbles ripen really fast so they are more difficult to stabilise below 30µm’, says Bon.

Instead, Bon and his team encapsulated fruit juice within the chocolate formulation and compartmentalised the juice into droplets that fall below the 30µm threshold value. ‘We used a water-based system. Density-wise, the chocolate bar feels heavy. With air bubbles, the feeling would be light and consumers might think that they have been conned,’ says Bon. They introduced solid particles made from chitosan molecules adsorbed onto silica into the mix. The solid particles sit at the interface between the oil and water to prevent the two particle types from fusing.

Cocoa butter has six polymorphic crystalline structures with different melting temperatures. Polymorph V, the desired form, melts in the mouth at 32–34oC and gives chocolate its gloss and smooth texture. The team found that the fruit juice infused samples contained large amounts of polymorph V, giving the chocolate the desired texture and appearance.

‘The results are encouraging in terms of cocoa butter polymorphism. However, fumed silica particles and chitosan are not something industry will be keen on using in confectionary products,’ says Bettina Wolf, whose research is focused on food, including chocolate, at the University of Nottingham, UK. She adds that ‘it would have been useful to see an estimation in calorie reduction for the final product’.

‘Some people might say that if you take out the fat, you replace it with sugar because some commercial fruit juices have a lot of added sugar,’ says Bon. ‘But in a normal chocolate formulation, the manufacturer adds a lot of refined sugar and you can take that out so you don’t have to add extra sugar. So you reduce fat levels by up to 50% and you can tune your sugar level depending on what type of juice you use. If you use pure water with vitamin C, there is no sugar in there, so you completely drop your sugar level as well.’

As for how the chocolate tastes, ‘obviously if you put in 50% fruit juice or 50% flat coke or coffee or whatever you want, then it will have a little bit of that flavour’, says Bon. ‘But we made a milk chocolate bar formulation with water containing a tiny bit of vitamin C and the taste was quite similar to ordinary milk chocolate.’