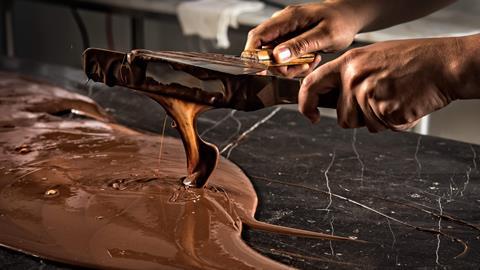 Scientists have discovered how a single ingredient can create glossy, tasty, melt-in-the-mouth chocolate without having to go through the complex and lengthy tempering process.

One of two phospholipids added to cocoa butter or molten chocolate in miniscule amounts promote the formation of the desirable chocolate crystal structure, called form V. This crystal form is crucial for chocolate to have the proper texture, gloss, snap and mouthfeel.

Molten chocolate must be expertly tempered by hand, cooled down on a marble slab while mixed. Alternatively large factories churn, scrape and pump molten chocolate while controlling its temperature. This is all about getting the microstructure right.

‘Cocoa butter has six crystal forms, and it is really easy to get the wrong one,’ says Alejandro Marangoni at the University of Guelph in Canada, who led the study. ‘The fourth melts too low, the sixth is too waxy. But V is just right.’ Form V usually starts to crystallise at around 27°C.

The cocoa butter Marangoni’s team used consisted of stearic acid (37%), palmitic acid (25%) and oleic acid (34%), mostly as triacylglycerols, with other components making up less than 4%. Cocoa butter is the fat extracted from cocoa beans and usually makes up around 30% of chocolate. The researchers first refined the cocoa butter to remove all minor components – monoacylglycerols, diacylglycerols, free fatty acids and phospholipids – and then added them back in individually to see if they impacted the formation of crystal V. 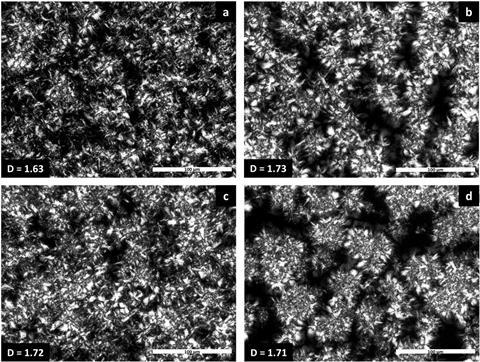 Polarised light microscopy reveals subtle differences in the cocoa butter samples’ microstructures. Although all show feather-like, radiating arrays of fibrous crystals, these spherulites are larger in refined (b) than unrefined (a) cocoa butter. Adding phosphatidylcholine (c) or phosphatidylethanolamine (d) changes the spherulites’ size and texture

Dispersing either of two phospholipids (saturated phosphatidylcholine or phosphatidylethanolamine) into cocoa butter or molten chocolate at 0.1% weight, followed by rapid cooling from about 50°C to 20°C, accelerates crystallisation and acts as a template form V crystal formation. When either lipid was mixed into a sample of crystallising commercial chocolate, they generated a product with perfect hardness, gloss and microstructure – without the need for tempering.

The phospholipids are natural chocolate components that are ‘very surface active’, explains Marangoni. ‘They had been reported to affect the crystallisation of triglycerides.’

Someone will have to create a supply chain for them and develop a way to disperse them in cocoa butter or chocolate, but otherwise these are oven ready for chocolate making, Marangoni says. ‘You wouldn’t need such complex tempering regimes with three-story high tempering towers.’ It might assist some small chocolate makers to reproducibly create high-quality products.

‘This is beautiful work,’ comments Stefan Bon, a colloidal chemist at the University of Warwick, UK, whose team discovered how to make healthier chocolate by replacing fats with fruit juice. Bon says that the new study demonstrates ‘that compounds that are there in 0.1 weight percent can massively influence the [chocolate] crystallisation process’.

Such compounds could make manufacturing of chocolate more straightforward, or even eliminate the complex tempering process altogether, says Bon. We might be able to ‘even create products with totally different mouthfeel and texture sensations’, he suggests.