The first compound with a germanium-oxygen double bond has been created by Japanese scientists. The delicate bond is stabilised by bulky protecting ligands and behaves similarly to its carbon counterpart in some ways, but quite differently in others.

The carbon-oxygen double bond of ketones (R2C=O) is a versatile stalwart of organic chemistry. But the heavier elements of group 14 - Si, Ge, Sn and Pb - prefer to form single bonds to oxygen. Making and stabilising ’heavy ketones’ is an important part of understanding the nature of chemical bonding and reactivity for these heavier elements, explains Kohei Tamao, who led the research along with Tsukasa Matsuo and a team from the Riken Advanced Science Institute in Saitama. 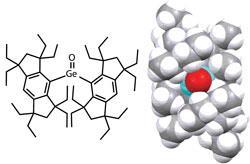 ’The E=O bond [where E is a heavy group 14 atom] is inherently polarised, owing to the larger electronegativity difference between E and O atoms, compared to the C=O bond in ordinary ketones,’ says Tamao. This means that the double bond in heavier ketone analogues is highly reactive and prone to forming polymeric chains, such as the -Si-O-Si-O-Si- chains of polysiloxanes, which are commonly referred to as silicones as their inventors were attempting to make compounds with Si=O double bonds.

To protect the Ge=O bond of their germanone, the team used a very bulky ligand called Eind (1,1,3,3,5,5,7,7-octaethyl-s-hydrindacen-4-yl). Tamao explains that the extreme bulk and rigidly defined ring structure of Eind provides the perfect protection for the central germanone. ’It’s like gathering moon rocks by developing an efficient rocket and robot,’ says Tamao. ’We have developed the Eind group as a new efficient protecting group [the rocket], and hence managed to prepare the germanone [the moon rock] which had never been accessible before.’

Philip Power, an organometallic chemist from the University of California, Davis, US, says that the discovery addresses a ’glaring absence’ of heavier analogues of compounds that are well known for carbon. ’Many people have tried,’ he says, ’but the reactivity of the bonds defeated their efforts.’

It is this reactivity that makes the germanone so interesting, Power adds. In some ways it is similar to a carbon-based ketone, for example it reacts with organometallic reagents like methyllithium in the same way. But in many ways its reactivity is very different - it reacts with carbon dioxide to form a cyclic carbonate species. ’It shows how the polarity of the Ge=O bond influences reactivity,’ Power adds, ’and how different the heavier main group elements are to carbon.’