Researchers in the UK and Germany have uncovered the mechanism behind how one of chemistry’s most remarkable self-assembled structures, a giant molecular wheel made from molybdenum oxide, spontaneously manufactures itself. The finding is likely to have important implications for manipulating self-assembly reactions and devising new ways to create useful molecular architectures.

Around 15 years ago Achim M?ller and colleagues at the University of Bielefeld in Germany showed that a simple mixture of sodium molybdate, water and a reducing agent in low pH spontaneously forms giant donut-shaped molybdenum oxide molecular wheels. At nearly 4nm across these were more than a magnitude larger than structures seen before, and represent a unique class of molecules with many potential applications for materials and nanoscience. However, the mechanism of the self-assembly remained unknown.

Now, Lee Cronin from the University of Glasgow in the UK and colleagues have solved the mystery by carrying out the reaction in a flow chamber. Here the reactants are introduced into the chamber under constant flow. The consistent replenishment of the reactants at the point of entry sets up a steady state, enabling the early reaction products to accumulate close to the entry point. In this part of the chamber the researchers saw crystals precipitating from solution. X-ray crystallography showed that the crystals were flat discs consisting of 186 atoms of molybdenum, subsequently shown to consist of a 36-Mo central core contained within the 150-Mo hollow wheel. 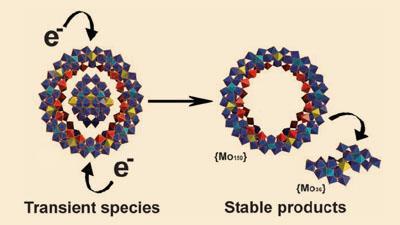 Once the wheel is assembled, the addition of eight electrons increases the repulsion between the ring and the template, causing the 36-Mo cluster to be ejected

’The archetypal molybdenum wheel has a huge negative charge - it is 28 electrons reduced,’ says Cronin. ’Whereas we determined that the molecular wheels grown in the flow system were 20 electrons reduced. We reduced it further and to our astonishment saw two sets of new crystals being formed - one set being the ’empty’ molybdenum wheels and the other set comprising the 36 Mo cluster.’

It seems that the 36-Mo clusters act as a template around which the molybdenums coalesce into a ring and the two anionic units are held together by sodium ions and hydrogen bonds. Under reducing conditions, the electrostatic repulsion eventually reaches the point at which the hub of the wheel is spat out: the smaller clusters act as temporary guest templates which form a host and then leave.

This approach should prove useful in unravelling other self assembling systems, Cronin believes. ’What we have shown is that with these complicated reaction pathways producing extraordinary molecular architectures, we can trap intermediates and learn how to start manipulating known systems and designing new ones.’

John Errington, an expert in metal oxide nanostructures at the University of Newcastle in the UK, says that the implications of the new work are profound. ’The ability to direct the nanoscale structures obtained from constitutionally dynamic mixtures of molecular metal oxide building blocks has been a major challenge since M?ller and co-workers first revealed the nature of the remarkable "big rings" formed in reduced molybdate solutions,’ Errington says. ’This ingenious use of flow chemistry is likely to provide the basis for general synthetic strategies that will further expand the horizons for this exciting area of chemistry.’