Paul Hamelinck and Wilhelm Huck from the University of Cambridge, UK, made a patterned surface where polymers could grow on only part of the pattern. By controlling the radical polymerisation they grew polymers with lots of branched side chains, like a brush. 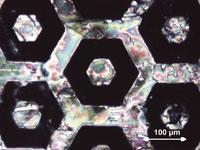 These brushes arrange themselves into a dense, organised array so that they can only grow upwards. The array forms a layer with a thickness that can be carefully controlled to as little as five nanometres.