Collaborating research groups in the US and China have observed a rare type of isomerism in a gas phase Au2I3– cluster. The cluster exhibits two stable structures with the same electronic configuration and potential energy surface that vary in only their Au–I–Au bond angles, a phenomenon that the researchers have dubbed ‘bond-bending isomerism’.1 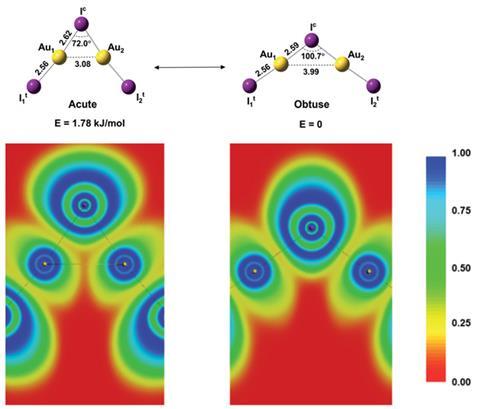 Lai-Sheng Wang’s group at Brown University first saw evidence for the existence of two isomers in the photoelectron spectra of the compound. Temperature-dependent studies showed peaks that were absent at low temperature and grew in intensity when the cluster was warmed, behaviour characteristic of a higher-energy isomer. Jun Li’s group at Tsinghua University then used ab initio computational methods to determine which conformations of Au2I3– would give rise to the experimental spectra. The results identified a ground state with an obtuse Au–I–Au bond angle of 100.7° and a low-lying acute isomer with an angle of 72.0°.

‘In chemistry, most molecules only have one structure,’ explains Li. Observing bond-bending isomerism is like ‘finding that one person has two bodies. It is really strange.’ An analogous phenomenon involving structures with different bond lengths, bond-stretch isomerism, was first proposed in 1972,2 but many early reports of experimental observations of bond-stretch isomerism were later disproven, and the researchers describe their results as the first experimental proof that this kind of structural isomerism can occur.

This surprising dual orientation is due to aurophilic interactions in the cluster. In the acute isomer, attraction between the two gold atoms partially compensates for the energetically unfavourable contraction of the covalent Au–I–Au bond. ‘It is against all common intuition that heating this anionic species then does not lead to a widening, but to a narrowing of the Au–I–Au angle to generate an isomer with a significant aurophilic interaction,’ comments Hubert Schmidbaur, emeritus professor of inorganic and analytical chemistry at the Technical University of Munich in Germany. Wang and Li’s groups now hope to find new gas-phase bond-bending isomers to extend their study.