Researchers in the US have come up with a cheap, environmentally friendly way to kill termites and other pests. The method involves the applying a sugar derivative, which inhibits an anti-microbial protein normally secreted by the insects, thereby leaving them open to disease.

Insects have efficient immune systems, although much of their workings are still unknown. Nevertheless, one aspect that is well-understood is the existence of proteins called pattern-recognition receptors, which can spot microbes that should not be present. Such receptors come under a class of ’gram-negative bacteria binding proteins’, or GNBPs.

Ram Sasisekharan of the Massachusetts Institute of Technology, together with colleagues from there and Northeastern University in Boston, has come across a termite GNBP that recognises microbial sugars typically found in fungi. Termites secrete this GNBP into their colonies to prevent the spread of fungal diseases. However, the US group has discovered that a certain sugar derivative, d-delta-gluconolactone (GDL), can block the action of the GNBP and therefore allow the fungal diseases to take hold. ’We’re targeting the Achilles’ heel of termites,’ says Sasisekharan.

GDL works by binding and blocking the critical sites on the GNBP that would normally detect the microbial sugars. When Sasisekharan and colleagues applied GDL to a colony of termites, the insects’ death rate rose abruptly, and a postmortem analysis revealed they had indeed died from fungal diseases. 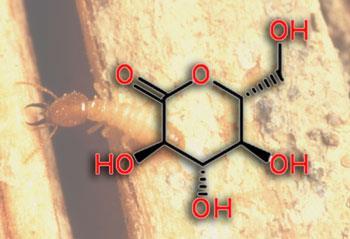 Damage to crops from pests including termites runs to more than $30 billion (?18.8 billion) every year, and farmers tend to resort to chemical pesticides. Aside from environmental hazards of such treatments, insects can build up resistances. According to Sasisekharan, it would be unlikely for insects to become resistant to GDL because it targets one of their most important functions. Moreover, he says the same GNBP is found in cockroaches and locusts, which means GDL might help in the pest control of all three insect groups. GDL could be integrated into nanoparticles and made into paint, or could even be produced by genetically engineered plants, he suggests.

David Chandler, an expert in interactions between microbes and insects at the University of Warwick, UK, agrees that the US group’s idea should reduce the chances of resistance. ’The importance of defence strategies to the biology of social insects is only just starting to be fully appreciated,’ he added. ’New understanding of the mechanisms of disease resistance can lead to new methods for social insect control, as illustrated in this paper. The implications of this work are very interesting.’