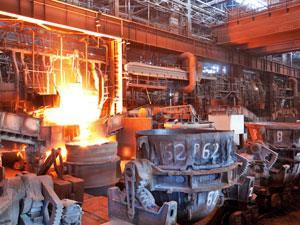 US researchers have developed a greener and cheaper way to produce metals such as steel. Their process could produce steel of higher purity, while cutting greenhouse gas emissions, and may even be useful on missions to the Moon and Mars.

The molten oxide electrolysis (MOE) technique uses high temperature electrolysis to make liquid metal and oxygen from a metal oxide feedstock. It is not a new process for producing metals, but is limited by its high cost and the fact it only works with consumable or highly expensive and rare anode materials such as iridium. As iron production requires temperatures of around 1600°C most metals corrode under such harsh conditions.

Now, Donald Sadoway and colleagues at the Massachusetts Institute of Technology have discovered that chromium alloy anodes can do the job and overcome these limitations. 'For the first time, it shows that earth abundant and affordable metals, and alloys in particular, could be used as an anode in high temperature electrolysis to generate oxygen,' says co-author Antoine Allanore.

The team observed limited consumption of the anode during the process over a period of five hours and say the stability of the anode is due to the formation of an electronically conductive solid solution of aluminium and chromium(III) oxides in the corundum structure.

'Now a new class of anode material is available to enable scale-up,’ says Allanore. ‘Furthermore, iron can only be obtained by electrolysis in molten oxide using a non-carbon anode, so for steelmaking in particular this is a dealmaker. The removal of carbon in the system allows you to make metal of better quality that is free of carbon impurities.'

Existing iron production uses carbon as a reductant and fuel meaning too much carbon ends up in the iron. A second step is therefore required to remove the excess carbon to produce mild or low carbon steel with less than 0.5% carbon.

'With MOE, there would be a shift in the secondary metallurgy practice, since with carbon-free iron, the addition of carbon to get the requested composition is easy, like adding salt to a dish,' explains Allanore. He suggests that this would make it possible to create new grades of steel that are not currently feasible or too expensive.

'It's an interesting experiment to get people thinking about changing the carbon-intensive process of iron making by means of the blast furnace,' says Tony Petric, a materials scientist at McMaster University, Canada. However, he has reservations about the longevity of the chromium anode operating at 1600°C for long periods. 'If the product was a precious metal or an expensive commodity, the costs may be justified, but it's hard to imagine this as a viable process for steel.'

What's more, to cut green house gas emissions, the electricity for MOE would need to be from renewable sources. Allanore acknowledges these issues and suggests that the MOE route at present might not have much competitive advantage to replace the existing route. However, he says the method could be useful for producing other metals such as rare earth, zirconium, ferrous and copper alloys.

The technology could also be useful for producing oxygen, as well as metals on the Moon or Mars. 'The initial and only choice of anode material for this application was platinum or iridium – very dense and expensive metals,’ says Allanore. 'With our discovery, provided the material performs successfully with the Lunar or Martian soil composition, one would decrease the costs and the weight of the anode, this last aspect being key to leave the Earth's orbit.'